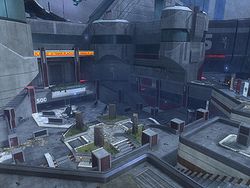 Tayari Plaza is an area located in Sector 5 on Mombasa Island in New Mombasa, Kenya.[1] A module component mirrored in the city's Sector 4,[2] the plaza is lower than the level of the surrounding streets and is accessed through a series of staircases.[1]

After the catastrophic slipspace event that nearly obliterated New Mombasa and thwarted an ODST group's attempted orbital insertion on October 20, 2552, Captain Veronica Dare's drop pod was knocked off course and crashed at this area at high speed. The impact damaged her drop pod which prevented Captain Dare from exiting it. Being stuck on her pod Dare called on Gunnery Sergeant Edward Buck to rescue her. However, Covenant troops moved in on the pod, and Dare had to force her way out of the pod and escape the area alone.[1]

After fighting alongside Marines to get to Tayari Plaza, Buck managed to find the pod. After a brief firefight, Buck opened Dare's pod to find it empty and assumed Captain Dare was killed or captured. The plaza was also the site of one of the squad's first encounters with Huragok armed with explosive harnesses. As the Huragok approached Sergeant Buck in an apparently threatening manner, his squad's sniper, Kojo "Romeo" Agu, arrived and killed the alien.[1]

Many hours later, the Rookie made his way into a building near the plaza. There he found Dare's helmet.[3]