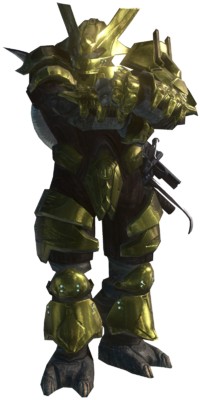 "He's got power armor, Chief! Take down his shields before you get close!"
— Anonymous Marine during the Battle of Earth[1]

In combat, Jiralhanae warriors often sport energy shielded power armor.[2] Though it was in use by 2524, it saw widespread field operations only during the later years of the war, most notably after the outbreak of the Great Schism.[3][4]

Power armor serves as a means of extra protection to the Jiralhanae, who, with a few exceptions, such as the crew of the Rapid Conversion, were generally poorly armored before the Great Schism.[5][6][7][8] Unlike the MJOLNIR Powered Assault Armor worn by Spartans or the Sangheili harnesses, Jiralhanae power armor does not augment the wearer's strength or speed, though due to natural strength of Jiralhanae, this isn't much of an issue.[9] It provides protection from ballistic and plasma weaponry, and well as light shrapnel and small explosions, until failure of the shielding. When the shielding fails, plasma often leaks from the armor. Once the shielding has failed, the armor typically falls apart, becoming unusable.[3][4][5]

The armor displays the rank of the wearer through color and complexity. This system is similar to those used by the Unggoy and the Sangheili, although it follows its own nomenclature. Weighing over half a ton, the armor provides light protection to its Jiralhanae wearer.[9]

The armor is produced in many varieties. The suits worn by higher-ranked Jiralhanae are more resilient than those worn by their subordinates. The suits worn by Stalkers feature active camouflage systems. The power armor worn by most chieftains can not be stuck by plasma or spike grenades and prevents Type-33 Needler and Gadulo-pattern needle rifle rounds from forming a combined explosion.

A handful of major design variations of the Jiralhanae powered armor have been observed.

A Jiralhanae Chieftain and two Jiralhanae Body Guards in a UNSC base Crow's Nest.

In Halo 3, Jiralhanae power armor does not give off as much glow as Sangheili and SPARTAN energy shields do when hit, which can be useful for concealing the wearer's position. Since it falls apart once the shields go down, the Flood cannot use it for themselves. Also, the Chieftain and War Chieftain power armor variants cannot be stuck by plasma or spike grenades. In Halo 3: ODST, however, Brute power armor glows brightly when hit, akin to MJOLNIR and Sangheili shielding.

In Halo 3, Brute power armor is generally inferior in strength to the shielding systems of Elites and SPARTANs, although this is compensated for by the Brute's natural physical resilience. A standard Brute's shielding is almost half as powerful as that of a Sangheili Minor, collapsing after seven to nine assault rifle hits on the Heroic difficulty, compared to twelve assault rifle shots for a Minor Elite's shields. The shielding of a Brute Captain or chieftain are only on par with an Elite Minor's shields, dropping after only twelve to fourteen MA5C assault rifle shots or several plasma rifle bolts. However, in Halo 3: ODST, Brute power armor is more than twice as resistant to projectile weapons than it was in Halo 3, making Brutes noticeably more durable opponents when fought with human projectile weaponry.

In Halo: Reach, only Jiralhanae chieftains wear power armor. It is more resilient than the armor worn by chieftains in Halo 3 and Halo 3: ODST, potentially requiring multiple MA37 assault rifle magazines to disable. This version of the power armor features regenerating shields. Though Captain Majors are fully armored, they do not have shields. However, all ranks can use Armor Lock.

In Halo Wars, Avitus and the Brutes under his command wear power armor. While the Army Commander is highly resistant to damage, the mechanics of his power armor are not depicted in-game. When Brutes are killed, their power armor leaks plasma but remains intact, unlike in Halo 3 and Halo 3: ODST.

In Halo: Landfall and The Life, the power armor worn by the Brutes does not deflect incoming damage, as Brute infantry are struck by incoming fire as though they have no shields.