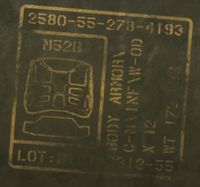 M52B body armor is a designation for certain armored protective vests worn by members of the UNSC Marine Corps. M52B body armor is usually worn with the CH252 helmet for greater ballistic protection. Nicknames for the body armor include BA, BO, Gear, and Shell.[1] 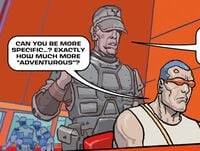 The first version of the M52B body armor was worn by Marines in 2552 during the earlier stages of the Battle of Mombasa[2] as well as the Battle of Cleveland,[3] and consists of a chestplate and backplate assembly with a supplemental abdominal plate and linked lower-back plate that collectively maximise torso coverage. The chest, abdominal and lower-back plates are frequently affixed with varying configurations of pouches. The chestplate and backplate themselves are distinguished by their relatively square overall shape and the shallow, shaped cut-outs over its surface. The chestplate reaches up to either side of the wearer's collar and entirely over the wearer's trapezius in order to connect with the backplate, lacking prominent buckles or straps. The abdomen plate links with the lower backplate around the wearer's side similarly. This version of the M52B does not feature any kind of vest layer between the plating and the wearer's uniform and lacks integrated pauldrons, though separate pauldrons are typically worn with it with their own distinct strapping system and the plating assemblies do feature a secondary inwards-facing material layer.[4] Crates on which this version of M52B body armor are depicted and labelled were commonly encountered throughout UNSC staging areas and combat zones during the Battle of Earth, including the Crow's Nest base near Voi,[5] and the Marine holdout in the Uplift Nature Reserve Section B visitor center during the Battle of Mombasa.[6] 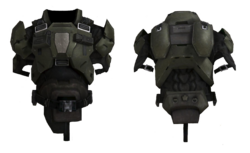 Front and rear views of the second version of M52B armor.

The second version of the M52B body armor weighs 14.5 pounds (6.58 kilograms)[1] and features a heavy chestplate with a layered surface and characteristic buckled straps running over the user's trapezius to secure it against the backplate, along with connectors under the arms. An additional buckle is located centrally on the bottom of the chestplate, and the chestplate and backplate are worn over a vest of flexible black material which covers the entire torso and runs partially down the upper-arms. The arm coverage of the vest extends only over the outwards-facing portion of the arm, is strapped over the underside, and features integrated pauldron assemblies. Below the pauldrons on each side, small shapes extrude from the black material, textured by a number of circular cut-outs. This version of the M52B features a prominent protective collar around the side and back of the neck. It lacks an abdominal plate, instead sporting a raised, brown-coloured patch of additional material over the stomach which tapers into groin protection, and a flat-topped discoloured plate at the bottom of the back with two attachment loops on it. This version was utilised by Sergeant "Ghost" and his unit some time prior to its continued usage in the Algolis Invasion,[7] as well as heavily during the latter-stages of the Battle of Earth.[8]

Performance-wise, the M52B armor is lightweight and durable, capable of sustaining surprising amounts of damage before buckling. The pockets and pouches which are often affixed to M52B body armor systems are an efficient method of storage for sufficiently sized items.[1]