A human wearing a vacuum suit outside a space station in the Halo 5: Guardians A Hero Falls trailer.

Vacuum suits are a form of protective suit used for extra-vehicular activity in outer space, intended to protect the wearer from the effects of vacuum and prevent asphyxiation. They also provide protection from dust and other particles which could damage the user and their equipment. Vacuum suits are completely sealed and come with an extra supply of oxygen (in the case of humans) or whatever other gas the user breathes. 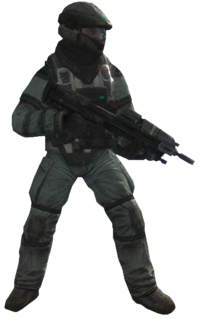 The vacuum suits generally used by UNSC pilots and infantry during space operations are based upon the universal BDUs used by the UNSC Marines, Army and the Air Force. Though identical in outward appearance to regular combat BDUs, these suits incorporate a fully pressurized body suit and a vacuum-rated ECH252 combat helmet. The variant worn by UNSC pilots is minimally armored, while the A/X combat suit used by Marines features heavy armor plating. These suits possess no EVA thrusters by default, but are compatible with EVA gear integration.[1]

Pilot-issue versions of these vacuum suits were used by the FSS-1000 Sabre crews who boarded the Covenant corvette Ardent Prayer during Operation: UPPER CUT. Personnel working aboard UNSC refit stations such as Anchor 9 also used similar vacuum suits.[2] Marine-issue vacuum suits were used by Sergeant Johnson and his squad as they neutralized the unsecured data of the UNSC Circumference in orbit above Reach.[3] Vacuum combat suits are also used during atmospheric missions where atmospheric hazards, such as nearby glassing, are present. This was seen during the Battle of Asźod, where UNSC Marines assigned to the UNSC Pillar of Autumn used vacuum combat suits.[4]

A model of vacuum suit used by UNSC Marines in the early years of the war was more clearly distinct from ground-based BDUs, featuring a green full-body suit, with olive-drab armor plates, and a helmet equipped with a HUD and COM systems.[5] They were used by the teams sent to clear the NAV database of the UNSC Prophecy during the Harvest Campaign in 2531.[5]

Bulky, black vacuum suits[6] with a compartmentalized design and self-sealing foam injectors were used by Staff Sergeants Johnson and Byrne during humanity's first combat encounter with the Covenant in 2525.[7]

This body suit is a form-fitting suit of polymer body armor that has systems that mask the infrared signature of the wearer, as well as creating a comfortable environment. The suit is fully sealed, and has an oxygen reserve of 15 minutes. The helmet has encrypted communications gear and a HUD, along with thermal sensors and motion detectors. Unfortunately, the suit's general complexity leads to complications. Over prolonged periods of time the suit will become very uncomfortable to wear, and is difficult to repair in the field.[8]

These suits were used by the SPARTAN-IIs in several missions before they got their MJOLNIR Armor.

The MJOLNIR Powered Assault Armor system utilized by the Spartan-IIs has 90 minutes of breathable atmosphere.[9] The vacuum capabilities of the armor were demonstrated during the initial phase of the Battle of Earth, where John-117 utilized the armor effectively in vacuum combat. As well as being completely sealed, the armor can prevent the wearer from burning up in a planet's atmosphere. Later in the Battle of Earth, Spartan-117 fell through the Earth's atmosphere into the jungle of Kenya, and survived, although he did use a part of the Forerunner Dreadnought as a heat shield.[10][11]

The most common version of the suit of combat armor worn by the Orbital Drop Shock Troopers is fully vacuum-sealed and includes oxygen reserves for 15 minutes.[12] However, some variants of the armor leave the neck and fingers exposed and are thus not rated for vacuum operation.[13]

The Covenant also use vacuum suits,[14] such as the blue-and-black suits worn by Kig-Yar Rangers. Sangheili Rangers and other special operations units utilize special vacuum-enabled Combat Harnesses, such as the Assault Harness, Flight Harness, Ascetic Harness and Commando Harness.