Are you looking for the UNSC Army Dress Uniform? 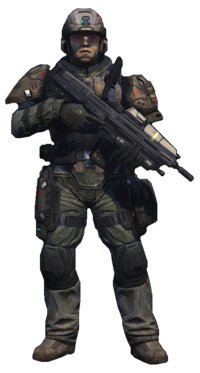 The UNSC Army BDU is the standard battle dress uniform of the UNSC Army.[1]

Troopers sport fatigues with varying camouflage patterns depending on the operation; the most widely used is a light woodland scheme, though desert pattern fatigues are also common. The armor plating used by the Army is generally colored dust brown, gray, or olive drab. The main components of the armor include an armored vest, a CH252 combat helmet, shoulder pauldrons, thigh armor, and in some cases, shin guards. Most of the armor components are standardized and are shared by the different branches of the UNSCDF, primarily the Marine Corps and the Air Force.

The chest armor has an extension to provide protection to the groin. The thighs are protected by plates of UA/NxRA non-explosive reactive armor with attachment rigs for equipment. The shoulder pauldrons are secured into rigs covering the upper arms and attached to the armor vest. Different types of pauldrons may be worn with the armor, the most common ones being a GUNGNIR shoulder pad and a larger pauldron of a different model; some troopers wear a different pauldron on each shoulder, while others wear two of the same type. Radio operators wear no pauldron on the left shoulder.