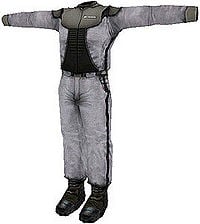 The UNSC Navy Working Uniform is the standard uniform worn by officers and ratings of the UNSC Navy for shipboard physical work and combat, as opposed to the dress and service uniforms. In this respect, they are much like the fatigues worn by UNSC Army and Marine Corps personnel.

The combat-ready uniform[1] is worn by both commanding officers and junior crewmembers when battle is expected.[2] It consists of a double-breasted olive drab tunic, bearing the seal of the UNSC Defense Force (though this may only be the case when assigned to work alongside Defense Force elements such as the Army and Air Force for extended periods of time[3]), with the wearer's surname printed above the seal. It is worn with matching trousers with cargo pockets, a belt-worn pistol holster, and a baseball-style cap, also bearing the UNSCDF seal.[2][4][5] The combat-ready uniforms of ship commanders bear the ship emblem on the right shoulder. Medals and ribbons are not worn with this uniform.[2][4]

A more austere version of the combat-ready uniform features the wearer's name on the left breast. Rank insignia are not displayed on the shoulders, and UNSCDF affiliation is also not displayed. A cap is not worn with this version. This is likely a training uniform, as its only known use was by drill instructors on Reach during SPARTAN-II training.[6]

Simple service coveralls are the basic uniform worn by UNSC Navy personnel while on duty.[7] Enlisted rank insignia is worn on the upper sleeve.[8] Most working uniforms are comprised of a light gray shirt, matching trousers, and a belt; these uniforms also have darker sections that display the UNSC insignia and overall resemble the combat-ready uniform. The letters "UNSC" are displayed on the backpiece.[9][10] Others are comprised of a single jumpsuit and are colored based on the wearer's technical specialty: Red, green, and blue are the most commonly used colors.[11][12][Note 1] With both versions, the wearer's name is displayed on the left breast.

Crew of the UNSC Spirit of Fire employ high-visibility yellow jackets, hard hats and visors for working in maintenance and engineering.[13]