Halo: The Thursday War is the second novel in the Kilo-Five Trilogy by Karen Traviss, and a direct follow-up to Halo: Glasslands. It was released on October 2, 2012.[1] A sequel, Halo: Mortal Dictata was released January 21, 2014.[2][3]

The book begins with a brief recounting of events of the previous book, as narrated by Admiral Margaret Parangosky. On Sanghelios, Evan Phillips recovers from an attack orchestrated by the Jiralhanae. Avu Med 'Telcam decides to gather the keeps under his command and launch his assault on Vadam, using the Brute attack as a distraction.

Phillips is given permission to wander the Forerunner temple. The fragment of Black Box residing in his radio has been damaged by a piece of shrapnel, saving Phillips' life. As Phillips tries to repair the fragment, its failsafes are triggered, causing it to delete all sensitive information. Phillips begins to explore the ruins, recording the engravings on the walls as he goes. Having limited success trying to translate Forerunner glyphs, Phillips unwittingly activates a portal, and is sent through.

Meanwhile, Parangosky travels to the UNSC Infinity, and meets with Fleet Admiral Terrence Hood, Captain Andrew Del Rio, and his XO Thomas Lasky. They discuss the possibility of taking the ship to Sanghelios to test its capabilities. Lord Hood also attempts to gain permission from the Arbiter to allow a team to land on the planet to rescue Phillips. On the UNSC Port Stanley, Captain Serin Osman extracts the members of Kilo-Five that had gone to ground on Venezia. They reluctantly reveal their discovery that a known terrosrist, Staffan Sentzke, is Naomi-010's father. The Port Stanley then travels to Sanghelios to rescue Phillips.

On ONI Research Facility Trevelyan, Dr. Irena Magnusson tries to talk Jul 'Mdama into giving her information about the Sangheili. She also uses him as a test subject for a new strain of Sangheili grain that is being developed by the humans. The grain has been engineered to be indigestible and to overtake native strains, thus driving Sanghelios to famine. Jul is eventually given permission to roam relatively free outside his cell, though he is fitted with the same sort of explosive harness that the Covenant fitted to Huragok. Prone to Drift is ordered to accompany him. As he explores, Jul asks Prone about the Forerunners, and is told of a figure known for his hatred of humans, the Didact. Slowly, Jul attempts to learn what he can, and find a way to escape the shield world.

After finally being allowed to land, Kilo-Five is sent on Devereaux's Pelican, the Tart-Cart, to Ontom to find Phillips. They arrive in the city to find the temple under attack by Jiralhanae forces. After killing them, Kilo-Five gain entrance to the Temple, and begin their search for Phillips. With BB using Naomi's helmet filters and sensors to "smell" Phillips' trail, the group tracks him until his scent mysteriously stops. They are confronted by a riotous crowd of Sangheili outside, angered by the humans trespassing on holy ground. The humans manage to get through the crowd and escape the city.

Raia 'Mdama, Jul's wife, is fed up with her husband's lack of communications, and goes off to find him, dragging a reluctant Forze 'Mdama along. They join 'Telcam in an assault on the Vadam keep, but their ship, the Unflinching Resolve, is shot down. Raia, Forze, and ‘Telcam manage to make it out of the sinking wreckage alive, and join the rest of the attacking force on the coast. ‘Telcam then informs the survivors that other keeps are rallying up against the Arbiter for allowing human troops to land on Sanghelios and enter a Forerunner relic.

Phillips has been teleported to another Forerunner structure in a farmer's field. He is found by some Unggoy laborers, and they comply with Phillip's request to take him to their masters. Phillips meets with the keep's masters, who are a group of female Sangheili lead by Elar 'Nas. Phillips tries to convince them to allow him to call his people, but Elar tells him that they are expecting an attack from rival keeps that plan to use the civil war as a backdrop to forcibly take their land. Phillips and the Sangheili manage to drive off the first wave of attackers, but Elar calls 'Telcam to tell him that the human he wanted found is with them. After receiving the call, ‘Telcam orders Forze to retrieve Phillips.

The Infinity, using technology procured from the Forerunners, jumps to Sanghelios, and arrives within a kilometer of its projected destination, a first for human ships. The Infinity is also equipped with systems that allow it to communicate while in slipspace, another first. Afterwards, Parangosky uses the opportunity to visit Osman. BB manages to locate Phillips, who has been sent to Acroli, a small rural state some 80 kilometers from Ontom, discovering as well that 'Telcam is headed the same way. Kilo-Five rush to Acroli, hoping to get there before 'Telcam can. After arriving at the embattled keep, they manage to drive off the Sangheili besieging it. However, one of the Pelican's engines is damaged in the attempt. Forze and Raia arrive soon after, but are soon convinced to allow Phillips to leave with the humans. Upon request, Forze and Raia help perform some hasty repairs to the Tart-Cart, and the humans leave the planet, traveling to the Infinity for proper repairs.

Seeing that the Arbiter is under siege, Hood offers to help turn the tide in the Arbiter's favor. The Infinity fires MAC rounds and missiles at the rebel ships and troops that present imminent danger to the Arbiter. Later, Parangosky visits Osman and brings Requires Adjustment and Leaks Repaired along to help upgrade the Port Stanley's slipspace drive and communications. After the Tart-Cart receives repairs and a slipspace drive, Kilo-Five head back to Sanghelios to "rescue" 'Telcam as he is necessary to maintain the imposed stalemate between the two Sangheili factions. After forcing 'Telcam on the drop ship, Kilo-Five travel to New Llanelli to drop him off as to allow his forces to retreat to the same location.

Soon, several of the Arbiter's supporting cruisers pursue many of 'Telcam's frigates. Osman deduces that in order to maintain the stalemate between the two factions, three of the cruisers have to be destroyed in order to allow 'Telcam's forces to retreat. She orders 'Telcam to notify those retreating ships that a Kig-Yar shipmistress by the name of Lahz has stolen UNSC nukes and will use them against the attacking cruisers. Osman, under the disguise of the Kig-Yar mistress, then proceeds to destroy the three selected cruisers. However, "Lahz" is unable to prevent one of the Arbiter's cruisers from destroying the ship containing Forze and Raia, who are killed in the ensuing crash.

Moments later, Port Stanley jumps to New Llanelli to retrieve Kilo-Five, who leaves before 'Telcam's forces arrive. Afterwards they jump to Trevelyan to check on Jul. Later, Jul learns of many portals that reside within the shield world but are malfunctioning due to poor maintenance. Prone then reveals that the Didact is still alive but "sleeping" on a shield world known as Requiem. Phillips personally pays Jul a visit and informs him of what he'd discovered on Sanghelios while Jul reveals the Forerunner symbols that he placed on his belt for the explosive harness. Phillips then returns to the Infinity. Paragonsky asks Phillips to see if he can get Halsey to integrate BB's damaged fragment back to his full self. After Dr. Halsey fails to assist BB with the task, he successfully reintegrates by himself. Afterwards Phillips and BB try to translate the Forerunner symbols they discovered from the Forerunner temple in Ontom. Later Port Stanley receives a Mantis per a request from Malcolm Geffen. Kilo-Five then prepares to travel back to Venezia now that the "Thursday war" is over.

Meanwhile, Jul heads to one of the portal stations where communication with Magnusson is cut off. Having discovered a potentially working portal that may lead to Requiem, Jul threatens that he'll remove the explosive harness, causing it to detonate, if Prone doesn't take it off and allow him to leave. Due to Prone's overriding directive to preserve Forerunner facilities, he is forced to remove the harness and allow Jul to escape into the portal. After 15 hours, Dr. Magnusson contacts Parangosky informing her of Jul's escape. Parangosky immediately asks Hood if he can drop her off at Trevelyan. After arriving, she is briefed about how Jul escaped. Angered by the time it took Magnusson to contact her and her inability to watch over a single Sangheili prisoner, Parangosky removes Magnusson from her position and orders her to be transferred to the Midnight Facility. She then promotes Hugo Barton as head of operations on the shield world.

Upon arriving at Venezia, Vaz and Naomi rendezvous with Mike Spenser, who claims he knows about the squad's mission. Vaz and Naomi disguise themselves as UNSC deserters and head back to Spenser's safe house, where Naomi is shown an image of her father. They are informed that Staffan was off planet for a few days. They also learn that the Covenant cruiser Pious Inquisitor, was owned by a Skirmisher named Sav Fel. Vaz and Naomi leave to sell tagged UNSC weapons in order to keep track of them and find out about the terrorist's movements. They stumble upon Staffan and Sav Fel while leaving, who are riding together in a van.

Having arrived on the other side of the portal, Jul encounters a group of Sangheili youngsters and discovers that he was teleported to Hesduros, a Sangheili colony that was once called Kelekos by the Forerunners. They tell him that they have lost contact with the Covenant for over a year and have no knowledge of the war's end. The locals help Jul to contact his keep; upon getting in touch with Naxan, he learns that Forze and Raia were killed in the assault due to human interference. Upon seeing the Forerunner markings on Jul's belt the youngsters shows him a second "holy gate", where Jul finds missing symbols and discovers they are the symbols present on his belt. He realizes that the missing symbols represent the Didact and coordinates to Requiem. They agree to help Jul find Requiem, as well as help him avenge the death of Raia. 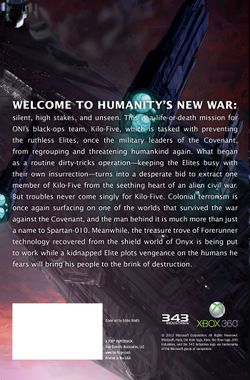