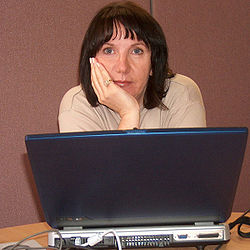 "When I was invited to write Halo fiction I already knew it’d be right up my street; not just because military fiction is my specialty, but because there’s also huge unexplored depth, grey areas, and really uncomfortable moral dilemmas that underpin the Halo story, and that’s like catnip to a writer like me. I write what’s known as tight third person – that is, I get right inside each character’s head and see the world as they see experience it – and Halo offers some terrific chances to explore some fascinating psyches caught in complex situations."
— Karen Traviss on writing Halo fiction.[1]

Karen Traviss is a British science fiction author and the writer of the Kilo-Five Trilogy.

Originally from the Portsmouth area, she currently lives in Wiltshire, England in the United Kingdom. She is a graduate of the Clarion Workshop for science fiction authors, and has previously worked as a journalist and a defense correspondent and served in the Territorial Army and the Royal Naval Auxiliary Service.

In addition to creating her own science fiction universe in the novel City of Pearl and its sequels, Traviss has authored multiple novels using existing intellectual property, most notably in the Star Wars universe. She has also written five novels set in the Gears of War universe, and served as the lead writer for the video game Gears of War 3.

As a fan of the machinima webseries Red vs Blue, Karen Traviss made several references to the series in her Kilo-Five Trilogy. The most prominent is the pronunciation of "Phillips" by the Sangheili as "Phyllis", which reference to two AIs in the machinima: F.I.L.S.S. and Sheila, whose original name was Phyllis.[2]