Were you looking for Unyielding, a music track from Halo 2?

"I'm not sure what that thing is. Don't look like any 'uneven elephant' to me-—more like two squids kissing."
— Avery Johnson

Unyielding Hierophant was a Covenant command-and-control center and refit-battle station that was capable of supporting a fleet of over 500[4] capital ships. It was capable of slipspace jumps[5] and was over 10 kilometers (6.3 miles) in circumference and 30 kilometers (18.6 miles) long. The Unyielding Hierophant possessed at least two pinch fusion reactor cores for power.[3]

Unyielding Hierophant was shaped like a figure-eight, with two tear-drop shaped bulbous sections connected at the center, each 15 kilometers (9.3 miles) long which makes it 30 kilometers (18.6 miles) long total.[1] A rotating ring was connected to the central hub by many long spokes, and is used by Covenant cruisers and carriers to dock with the space station. Thin, filament-like tubes extended from both bulbous sections and moved over the surface of the ring; these may be tubes used for transporting personnel and cargo between the ring and other parts of the station.

Running the circumference of the station's hub was a repair-and-refit facility, with many slots for Covenant spacecraft to dock and be attended to by Huragok work teams. This section of the ship was crewed by thousands of Huragok and a small number of Unggoy.

Inside the main sections, it had large "rooms" that contained environments with foliage, water, and animals to simulate the Covenant's worlds and make occupants feel more at home, rather than on a huge station. John-117 compared these to the large atrium that FLEETCOM HQ has in its lobby. These areas had temples for religious sessions. In these large rooms, the Spartans saw pipe-like tubes that carried passengers from one destination to the other inside capsules. Also, the Covenant seemed to have an almost complete control of gravity in the station, as water was seen flowing up and sideways. 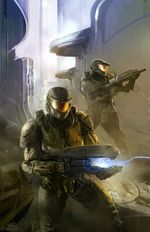 At some point before the Covenant assault to Earth, the Prophet of Truth had managed to discover the location of humanity's homeworld. He secretly begun amassing a fleet of over five hundred warships commanded exclusively by the Jiralhanae to attack and occupy Earth.[6]

At the time of its destruction it was located in the Tau Ceti system. The system was used as a rendezvous point for Covenant forces before they prepared to launch their impending attack on Earth. When the crew of the Ascendant Justice-Gettysburg discovered this, they decided to initiate a first strike against the Covenant to postpone an inevitable Covenant assault against Earth. A team of SPARTAN-IIs, among them John-117, Grace-093, Frederic-104, Linda-058 and William-043 commandeered a Covenant dropship and, after they had reinforced the armor of the dropship with Titanium-A armor, lead, and carbon molybdenum steel I-beams so the ship could withstand immense pressures, departed and made the transition from Slipspace to normal space in one piece.

The Spartan-IIs infiltrated the station, using the Covenant's own tugs to tow them aboard, finding themselves within a hangar capable of docking hundreds of single-ships.[7] Avoiding the Covenant presence, the Spartans proceeded inward, with a copy of Cortana infiltrating the Station's network to distract and hinder the Covenant's coordination. Managing to cross an open plaza with only the loss of Grace-093, who was killed by a Jiralhanae with a Brute Shot, Blue team neutralized the Jiralhanae guards of a temple and proceeded to the 512 tera-watt reactors, with the copied Cortana setting them to overload, which would destroy the station and nearby fleet.[8]

The Spartans attempted to flee using captured Banshees, now taking heavy fire from the Covenant forces aware of their presence. After destroying one of the plaza's windows, they managed to escape, hijacking a floating Covenant dropship and making their way to the evacuation point for the Ascendant Justice-Gettysburg. The Ascendant Justice, separated from the Gettysburg and commandeered by Vice Admiral Danforth Whitcomb and Lieutenant Elias Haverson, drew the Covenant's attention to the station with a holographic ruse of the Menachite Forerunner crystal, keeping them within the blast radius; the detonation destroyed virtually all of the five-hundred strong fleet, the largest space victory ever accomplished by the UNSC.