Operation: FIRST STRIKE was a raid by survivors of the Battle of Installation 04 and the Fall of Reach on the Covenant space station Unyielding Hierophant on September 13, 2552. It was the largest UNSC victory since the Battle of Sigma Octanus IV,[1] and the most decisive since Admiral Preston Cole's last stand at the Battle of Psi Serpentis.[2]

Having discovered the location of Earth, Covenant forces under the command of the Prophet of Truth were building a massive invasion fleet, consisting of about five hundred ships to invade humanity's homeworld. Truth kept his knowledge of Earth's location hidden from his fellow Hierarchs, Regret and Mercy. The assembly of the fleet, which was led entirely by the Jiralhanae, also remained secret; Truth planned to have the Jiralhanae usurp the Sangheili as the Prophets' protectors, simultaneously eliminating his fellow Hierarchs.[3]

After discovering Truth's plan, and the location of Unyielding Hierophant in the Tau Ceti system, from a piggybacked transmission, the AI Cortana and SPARTAN John-117 formulated a counter plan that would result in either a massive victory or the deaths of the remaining active SPARTAN-IIs. 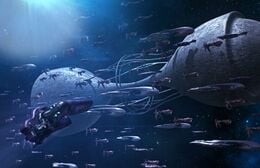 In a desperate attempt to stop the massive Covenant armada from invading Earth, the five Spartans aboard the hybrid vessel Gettysburg-Ascendant Justice - John-117, Frederic-104, Linda-058, William-043, and Grace-093 - infiltrated the Covenant repair and refit station Unyielding Hierophant via a captured Spirit dropship. After landing in a vast hangar, the Spartans began to sneak through maintenance access and ventilation tunnels until they found the station's reactor core.[1]

As the Spartans approached a large temple-like atrium, they were ambushed by Jiralhanae guards. During this ambush, Grace was killed when the Covenant tracked her COM signals; after the immediate threat was eliminated, John activated Grace's MJOLNIR suit's fail-safe detonation system, killing the investigating Covenant soldiers.[1] The Spartans then fought their way to a reactor room and set the generators to overload. Once the reactors were set to overload, the Spartans returned to the atrium, opened the airlocks, and blew out a heavily enforced window that enclosed the atrium with hijacked Banshees, sucking all Covenant forces inside the atrium into space.[1]

Around this time, Cortana's attempts to hack the proselytization network was discovered and she was forced to make hundreds of copies to protect herself. She successfully opened the airlocks and interfered with the Covenant's communications by repeating error messages on their COM systems endlessly. The Spartans then traveled to the far side of a nearby moon and unexpectedly met the UNSC Gettysburg, now separated from Ascendant Justice, which Vice Admiral Danforth Whitcomb and Lieutenant Elias Haverson had taken to the system's Oort cloud to gather intelligence from a distance. Having realized that destroying the station would not be enough to stop the threat to Earth, Whitcomb had Ascendant Justice's slipspace drive mounted on the Gettysburg while he and Lieutenant Haverson used the Ascendant Justice to lure the Covenant fleet into a trap.

Vice Admiral Whitcomb and Lieutenant Haverson then took the Ascendant Justice and crashed straight into the Unyielding Hierophant. Using a hologram, Whitcomb pretended to have the Forerunner crystal, which had been found beneath CASTLE Base on Reach, aboard the ship and challenged all Covenant forces in the system to try and take it from him. The Covenant battleships all gathered around the Ascendant Justice and the overloading battle station, attempting to take the crystal from Whitcomb. The station then overloaded and exploded, killing Whitcomb and Haverson, destroying most of the Covenant fleet, and saving Earth from impending invasion.[1]

After using a spy drone to view what remained of the fleet, the crew of the Gettysburg made a random slipspace jump away from the battlefield and then finally to Earth using the Ascendant Justice's slipspace drive, which had been fitted to the human ship. The crew then warned Earth of the Covenant's intent to invade the planet.

Meanwhile, on High Charity, Tartarus, the Chieftain of the Jiralhanae, informed the Prophet of Truth of the armada's destruction. Truth was disturbed by the disaster but otherwise regarded it as a minor setback. He told Tartarus to have the surviving ships rendezvous at their designated coordinates. These ships would later reinforce the Prophet of Regret's forces during the Covenant's initial attack on Earth at New Mombasa.

Covenant pilots also recovered three tiny shards of the Forerunner crystal from the debris. Tartarus presented these shards to Truth, who instructed Tartarus to reward the pilots, then quietly eliminate them in order to ensure that his plans were kept hidden from the rest of the Covenant.