The Skirmish over Threshold was an engagement that took place after the Battle of Installation 04 on September 22, 2552. It was fought between human survivors from the Installation 04 and the remnants of the Covenant Fleet of Particular Justice in the debris field of the Halo ring in orbit around the gas giant Threshold in the Soell system.[2]

By the morning of September 22, the majority of the Covenant ships of the Fleet of Particular Justice abandoned Alpha Halo and took cover behind Threshold to avoid debris from the ring.[1] The remaining seven ships under the command of the Ascendant Justice eventually moved out of the cover of the gas giant and begun to search the debris field, likely to monitor for any Flood activity or survivors.

Unbeknownst to the Covenant, John-117 and several other UNSC personnel escaped before the destruction of Installation 04. John, onboard a Longsword interceptor and with the aid of Cortana, managed to locate the cryo-chamber of Linda-058, which had been jettisoned from the UNSC Pillar of Autumn before it crashed on the ring. Soon, another signal was detected from a UNSC Pelican dropship, hiding behind a piece of debris from Installation 04. Unfortunately, the Covenant soon spotted the humans. Cortana maneuvered the Longsword into a slingshot orbit around Basis, Threshold's moon, and while on the moon's far side, they picked up the survivors from the Pelican. The survivors abandoned the dropship, loaded it with multiple M1011 Moray space mines and sent it ahead of them as they prepared to hijack the Ascendant Justice, the flagship of the Covenant fleet. Coming around Basis, they faced multiple Seraph fighters, but managed to destroy them with Moray mines. 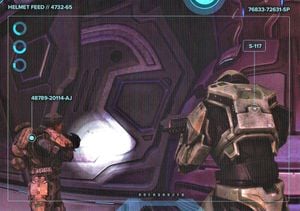 Piloted by Shiela Polaski, the Longsword managed to fly into the flagship's hangar bay. From there, the humans made their way to the bridge, where John faced a Sangheili warrior in single combat, barely winning the duel. Cortana then vented the atmosphere out of the rest of the ship, killing most of the Covenant aboard.

After the rest of the Covenant vessels realized the Ascendant Justice had been captured by the UNSC, they started to fire on it. The Covenant AI in the ship's systems also blocked Cortana's access to the ship's navigation controls and the slipspace drive, preventing them from escaping. During the engagement, Cortana maneuvered the ship deep into Threshold's gravity well, and the other Covenant ships pursued. Meanwhile, John-117 took a Huragok to fix the ship's power coupling that kept Cortana from accessing the slipspace drive. At the last moment, the creature managed to fix the coupling, and while Cortana had thought a slipspace jump, as deep into the atmosphere as they were, would be impossible, she soon realized that the extent of Covenant slipspace technology was far greater than she had imagined and managed to perform an in-atmosphere slipspace jump away from Threshold.[2]

The Ascendant Justice would arrive at Reach in a matter of hours. From there, the human survivors were joined by the other surviving Spartan-IIs and Vice Admiral Danforth Whitcomb.