A squadron of Longswords during space warfare.

The GA-TL1 Interceptor/Strike Fighter, or Longsword, is the mainstay multi-mission platform in service with the UNSC Air Force and UNSC Navy.[1][2] Longswords are capable of atmospheric and exoatmospheric (A/X) operation and can be fitted for myriad roles simultaneously. Among those roles, Longswords most often operate as fleet defense fighters, orbital defense and deep space interceptors, or as strike fighters, among other, more specialized tasks.[1]

The various ordnance carried by a C712 Longsword.[3]

The GA-TL1 Longsword is designed primarily as a fighter, though it can also be used for interception, suppression, bombing, or direct attack.[1] There are a number of variants of the craft, with some variants measuring 64 meters (210 feet) long and 75 meters (246 feet) wide.[1][4]
Their crew sizes can vary between two and four individuals; the crew may be assisted by an onboard artificial intelligence.

While there are several noticeable external and presumably internal differences among variants, all Longswords share a common overall architecture. Most Longswords feature a wide, manta ray-like design with a rear-facing boom apparatus protruding from the center of the fuselage. The exhaust ports for the Longsword's twin fusion engines are also visible at the rear of the fuselage.[4] The newer C718 Longsword differs in a few key areas. It shares the same general arrow-shaped fuselage, but with more stubby wings. The C718 also does away with the tail-like boom and incorporates four more engines than the C709 and C712 variants.[5]

The Longsword can be remotely piloted, as was performed during the Battle of Chi Ceti in 2525.[6] The MJOLNIR Powered Assault Armor/Aviator helmet is recommended for use by Spartans acting as Longsword crew members.[7]

The standard armament of the GA-TL1 Longsword is the M9109 50mm cannon.[1][8] Some variants are armed with 110mm rotary cannons[9] or a turreted 120mm ventral gun that can be retracted into the hull,[10] though the latter is likely a secondary weapon. The Longsword can also accommodate any of several supplementary weapon systems, including four ASGM-10 missiles[11] or ASGM-15 missiles,[12][5] a variety of bombs including laser-guided M888 Octadart bombs,[12][5] M1011 Moray space mines, or even a single Shiva-class nuclear missile;[5] when remotely piloted, the Longsword itself can be used as a delivery system for the Shiva warhead.[6] As well as Shiva nuclear missiles, Longswords are capable of deploying HAVOK tactical nuclear weapons.[13][5] Longswords are also capable of dropping and deploying certain variants of ordnance pods to resupply troops on the ground.[14][5]

There are multiple variants of the GA-TL1 Longsword that are designed to perform specific functions, such as the C708, the C709, and the C712.[15] However, these variations are not static; Longswords can be modified on a craft-by-craft basis to fit the needs of a given mission.[1] 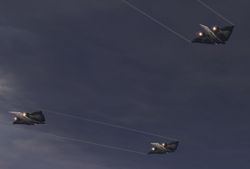 Three Longswords assaulting the Forerunner Dreadnought in the Battle of Voi.[23]

The Longsword, manufactured by Misriah Armory, was designed during the 25th century by Gov Aukland and Thomas Levesque, whose names inspired the GA-TL1 designation.[1] Longswords saw service during the Insurrection.[19]

Later, Longswords were deployed on the front lines of nearly every major engagement of the Human-Covenant War under the UNSC Navy.[1] Longsword Squadron Delta, assigned to the frigate UNSC Commonwealth, engaged Covenant forces during the Battle of Chi Ceti. The Longswords were destroyed when the Commonwealth was forced to sacrifice them to get a shot on the Unrelenting with a Shiva-class nuclear missile. The Longswords that survived the firefight were destroyed when the nuclear weapon detonated.[24]

The C712 Longsword variant saw heavy use during the Fall of Reach.[25] Later in the battle, the Halcyon-class light cruiser UNSC Pillar of Autumn launched a remotely piloted Longsword equipped with a Shiva-class nuclear missile during a battle with an Kewu-pattern battleship. After the ship's shields were taken down, the "smart" AI Cortana crash-landed the Longsword on the ship. The nuke's detonation destroyed the Covenant vessel.[26]

Famously, the C709 Longsword was used by John-117 to escape the destruction of the UNSC Pillar of Autumn and Installation 04 during the Battle of Installation 04.[27]

During the Battle of Voi, numerous C712 Longswords aided a number of frigates in attacking the Prophet of Truth's ship, once John-117 cleared the way by destroying an anti-aircraft battery. However, the attack proved unsuccessful and Truth's fleet was able to evacuate through the Portal at Voi which they opened moments after the failed attack.[23] Longswords subsequently took part in the Battle of Installation 00 after the Fleet of Retribution and the Seventh Fleet followed Truth through the portal to prevent the firing of the Halo Array. At least one was shot down during the battle and crashed on the Ark which was witnessed by the ground team led by John-117.[28]

On July 26, 2557, Spartan Blue Team used a Longsword to reach Halo Installation 03.[29] On March 11, 2558, several Longswords defended UNSC Infinity when she was attacked by insurgent aerospace craft after the freighter Pilgrims' Pride was pulled into Infinity's primary docking bay.[30]

During Operation: WHISTLE STOP on May 8, 2558, Infinity deployed three Longswords to escort two D77H-TCI Pelicans to rescue Spartans Naiya Ray and Gabriel Thorne from the pirates inhabiting the planet. One of the fighters deployed HAVOK tactical nuclear weapons, destroying the pirate base.[13] At least one Longsword was deployed during the Battle of Oban on July 16, where it destroyed two Covenant Phantom dropships.[31] A few days later, three Longswords from Infinity escorted two D79-TC Pelicans to the surface of Aktis IV during a battle on the planet.[32]

The C718 Longsword entered service within the UNSC in response to the events of late 2558, incorporating decades of research and captured alien technology. A first within the GA-TL1 Longsword family, the C718 also includes cutting-edge stealth technology.[5]

In October 2559, several of the Infinity's Longswords took part in Operation: WOLFE, fighting against Escharum's intrusion corvette and the forces that it unleashed.[33]