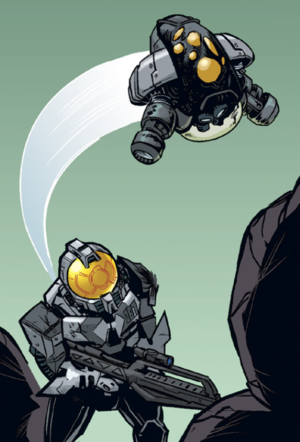 The surveillance drone[1] is a remote-operated drone employed by SPARTAN-IIs. In 2526, the drones were part of a package of surveillance and reconnaissance equipment outfitted to the Spartans John-117 and Kelly-087 of Blue Team as part of the Project COBALT enhancements to their Mark IV MJOLNIR armour.[1]

The drones are carried on the back of the COBALT armour, and can be deployed into flight. While in use, the drone can feed its remote view into the helmet feed of the MJOLNIR visor.[1]

The drones were assigned to John-117 and Kelly-087 during the Battle of Alpha Corvi II. Like the other specialty Project COBALT equipment, the Spartans were advised to use it to gather field data for Office of Naval Intelligence engineers to use, though not to become reliant on it as they would be taken away after the mission. During the battle, John-117 deployed his drone to accompany Whitaker and his Insurrectionist forces to keep an eye on them and test out the equipment before they may become reliant on it during battle.[1] Kelly later deployed her drone during the mission to scout out the caves and find Linda-058.[2]