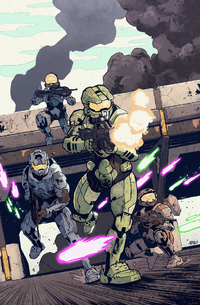 Project: COBALT is a project that introduced a new chassis of MJOLNIR Powered Assault Armor/Mark IV for Blue Team to use during the Human-Covenant War.[1]

In an effort to optimise each Spartan's field competencies and test skunkwork modifications, the Project: COBALT suits' titanium alloy frame were temporarily modified from their baseline Mark IV iterations to bear distinctive features.[2] The COBALT suits had prototype stealth technology that was in each suit[3], with the plating being tinted with the same refractive coating employed on the Office of Naval Intelligence's Prowlers.[2] The Spartans were advised to use it sparingly, as it was a large power draw. [4]

During the Battle of Alpha Corvi II, the suits were additionally outfitted with a suite of surveillance and reconnaissance equipment.[4]