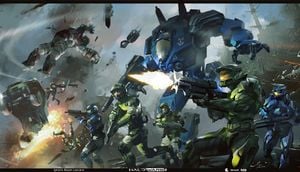 The HRUNTING Mark III exoskeleton (back) is the most widespread legacy of Project HRUNTING. Pictured here is a Mark III [S] model employed by the forces of UNSC Spirit of Fire.

Project HRUNTING was a powered exoskeleton development project carried out by humanity, beginning in 2166, during the height of the Interplanetary War. The program was eventually picked up by the Materials Group and continued under Office of Naval Intelligence direction for hundreds of years, before formally ceasing development in 2525, wherein it was consolidated with the YGGDRASIL program.[1]

Powered exoskeletons and mobile armour systems had been a key focus of military R&D since the early portions of the 21st century, and had been through various periods of intense research and development which attempted to resolve cost issues and combat effectiveness for early models. For most of its history, the Colonial Military Authority (CMA) was the biggest investor in exoskeleton projects, seeking to enhance the effectiveness of their relatively low-in-number ground forces for policing the colonies. The United Nations Space Command (UNSC) generally held very little interest in the program for the majority of its history, being confined entirely to the Sol system and uninterested in non-naval technologies for the vast majority of its history.[1]

HRUNTING was kickstarted during the Interplanetary War, with the research groups being put together in 2166. The early prototypes produced in this era were generally evaluated positively, though the program was ultimately scrapped following the war's end and the subsequence demilitarisation of the Sol system. The Materials Group later acquired HRUNTING program and its assets for their own portfolio and continued to develop them over the next few centuries, with significant investment by the CMA as extrasolar colonisation truly began to bloom. Accordingly, the Materials Group refocused the program on developing projects and technologies that could aid in colony settlement and military logistics, rather than serving as a purely combat-oriented vehicle.[1] 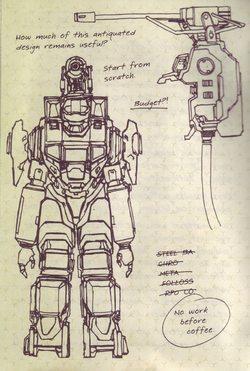 A sketch of the Mark I HRUNTING exoskeleton, sketched by Catherine Halsey in her journal.

The HRUNTING Mark I exoskeleton was produced throughout the Domus Diaspora, and fielded in limited numbers by the UNSC - with modified variants licensed and modified for usage by civilians in heavy lifting and material handling roles such as aboard spacecraft and space stations. The military variants of this era were employed as logistical support vehicles and limited weapons carriers.[1]

HRUNTING Mark II was developed in the 2300s as a battle armor system, and showed promise as a force multiplier for special forces usage. However, they proved too expensive and unreliable for extended operations on the frontier and found little favour by the CMA and little interest by the UNSC. As such, the Mark II was discontinued by 2400, by which time the remaining suits were found only in military museums and in the hands of private collectors.[1]

Of all the HRUNTING programs, the Mark III "Cyclops" has proven the most venerable, and is widely employed as a capable logistics and combat engineering vehicle. The Mark III is larger and more proficient than the older Mark IIs, with the improved [B] model even pressed into frontline roles as a siege machine during the Human-Covenant War. The Mark III platform has proven so adaptable that numerous upgrades and models have been produced including some intended for use as superheavy infantry. The Cyclops continues to see heavy usage in the civilian sector in a wide range of industrial, security and even law enforcement roles. 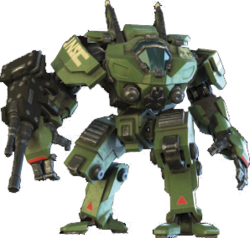 A number of ultra-specialised minor Cyclops variants exist, though there are no official categorisations for these variants. However, they often follow common themes in terms of their loadout and scope of modification. Many of these include environment-adapted variants of the Mark III [B] nd Mark III [S] to operate in arctic, desert, desert sniping and jungle conditions, or variant modifications such as the following;[2]

While the CMA retained great interest in the fruits of HRUNTING, in 2461 they began their own ventures into supersoldier augmentation and weapon system R&D supported by ONI. This resulted in Project: MELAENO - the equipment and technical support arm of the CMA's own ORION Project. Where ORION focused on the development of human supersoldiers, MELAENO focused on their equipment ultimately culminating in the development of the Orion Exoframe Load Carrier - a short-lived powered exoskeleton project that underwent some limited field-testing before being cancelled.[1]

The remains of MELAENO remained classified even throughout the CMA's dissolution in the early 26th century, though Doctor Catherine Halsey was able to gain access to the files in 2515 and strip it of useable information. In 2510, Halsey conducted a review into HRUNTING as a civilian consultant for ONI and deemed HRUNTING as an "interesting failure" for not innovating and exploiting the breakthroughs it had achieved. However, Halsey was unwilling to reform the project and reform its administrative burden and instead proposed the creation of a new program - termed MJOLNIR - with a new handpicked team unbound by dogma or preexisting assumptions. The useful components of HRUNTING and MELAENO were incorporated into MJOLNIR alongside new innovations, and within a year of initiation MJOLNIR had already eclipsed HRUNTING in progress. Despite this, ONI kept both programs online in parallel with one another - with MJOLNIR eventually going on to furnish the SPARTAN-II program and its successors.[1]

In the later 2530s, the remnants of Project MELAENO were themselves used as a useful stepping stone by the Watershed Division, who went on to create the Semi-Powered Infiltration armor for the nascent SPARTAN-III program.[1]

HRUNTING was formally discontinued by the Materials Group in 2535, due to a widespread consolidation of assets by ONI during the Human-Covenant War. By this time, the project was viewed to have reached a dead-end even despite the continued employment of the Cyclops and its variants. As such, HRUNTING was combined with the simultaneous Project: YGGDRASIL in a program that paired engineers and scientists from both work groups with external corporate partners from Lethbridge Industrial, Beweglichkeitsrüstungsysteme and Hannibal Weapon Systems. This new combined program, sometimes termed "HRUNTING/YGGDRASIL", primarily focused on the development of armor defense systems amid a number of false starts and nonviable prototypes.[1]

The Armor Defense System (ADS) prototypes enjoyed great success and at least three of their major developments were later proven to have a tangible strategic impact, including the Mark I, Mark II and Mark IX.[1]