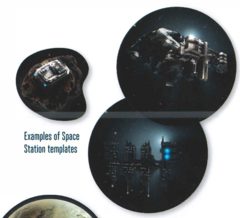 A number of space station types.

A space station is a platform or facility built for use such as habitation, research or defense in a planetary orbit or deep space. The term can also be applied to mobile facilities.

Human space stations were constructed across Sol with the advent of interplanetary colonization in the late 21st century, followed by other star systems in humanity's subsequent interstellar era. By the 26th century, space stations had come to fill a broad range of roles as starship construction and docking facilities, heavily-armed defensive outposts, fleet support, even as colony habitats, in addition to their original primary role as science facilities.

The Covenant operated numerous space stations, most notably their capital city High Charity, a mobile station almost constantly on the move. Additionally, an extensive network of resupply stations, spaceports and other facilities existed across Covenant territory to serve their ships and fleets.[2]

The Forerunners constructed their most notable space installations on a planetary scale, and many of them are more aptly described as megastructures than space stations. The Halo rings, the Arks, the shield worlds and the Capital are examples of such installations. Nonetheless, there are some which fall within the more conventional definition of a space station.