"That MAC gun could put a hole clean through a Covenant capital ship. Coordinated fire from the Athens and the Malta, nothing's getting through this battle cluster in one piece."
— Avery J. Johnson

The Moncton-class orbital weapon platform (hull classification symbol: OWP) is a line of orbital defense platforms in the service of the United Nations Space Command.[2][6] They have been a staple of the UNSC's planetary defence strategy for decades, seeing service in the Insurrection, the Human-Covenant War and post-war era.

The Moncton-class, unlike other models of defense platforms, was built with an on-board power source. As well as a fusion reactor, the lower stalk of the station was composed of stacked liquid-metal capacitors, which allowed for the rapid firing of its MAC so long as there is charge in their cells. If the reactor is damaged, the docking umbilicals could parasitically leach charge off a docked UNSC warship to power its weapon.[2]

Moncton-class platforms are equipped with a 14D4A1 Magnetic Accelerator Cannon, a power-hungry 802.2 meter (2,632 ft) long coilgun that fires a ferric-tungsten round traveling at several kilometers per second, which carries enough energy to punch clean through a Covenant capital ship. The shell is accelerated by hundreds of asynchronous linear induction motors, which all line the barrel of the weapon. They were also equipped with seven M606 Goalkeeper point defense guns to protect them from enemy fighters, bombers and boarding craft.[2]

152 UNSC Air Force and Navy personnel man Moncton-class platforms, all living within the cramped crew quarters on the station's ring section. This crew can include a number of senior officers who reside in an exposed command center, which can be modified with the equipment and facilities needed to coordinate entire defensive efforts around the planet at which they are stationed. 136 UNSC Marines are stationed within security wings. These could be overwhelmed by Covenant boarding teams, provided enough of them are able to reach the station. For emergency evacuation, at least sixteen SKT-9 Bumblebees are stowed away in launch bays around the docking section.[2]

To temporarily supplement their on-board complement, two purpose-built docking ports can be fitted on each side of the station, both of which can accept a UNSC frigate. Eight horizontally-articulated corridors can connect to airlocks to allow for the exchange of personnel.[2]

In addition, multiple hangar bays can be fitted. During the Human-Covenant War, each individual station in a given battle cluster was optimized to accept a specific type of aircraft. One would be equipped to service light space fighters and utility craft, carrying up to ten F-41D Broadswords and D77-TC Pelicans. Another would carry interceptors such as GA-TL1 Longswords. The third is specialized towards D82-EST Darters and maintenance drones.[2] 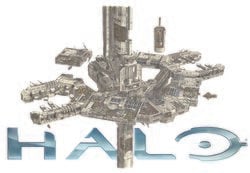 By around 2493, the orbital defence grid of Earth, consisting of over 300 Moncton-class OWPs,[6] was in the planning stages - later derisively referred to by Sergeant Avery Johnson as "all theory and politics".[1][Note 1] By 2517, at least one such platform was operational in orbit of Reach.[5]

Alongside its sister classes, the Moncton-classification of OWP played an instrumental role in the defence of numerous human colonies during the Human-Covenant War. Multiple were present around Camber during the planet's invasion in 2542.[7] They continued to see service into the war's final weeks, taking part in the defence of Reach (albeit, having mostly been supplanted by the more powerful Erőd-class OWPs there),[8]

Moncton-class orbital weapon platforms made the entirety of the three hundred orbital defense platforms that formed Earth's orbital defense grid in October 2552.[9] These installations formed a key part of Earth's orbital defense grid, an ambitious plan that combined ground-based aerospace fighters, low-orbit satellites, and warship squadrons into a multi-layered integrated system. During the Battle for Earth, when the Prophet of Regret's Fleet of Sacred Consecration stumbled into Earth's defenses, Moncton-class platforms engaged the Covenant fleet at range, with Cairo serving as Lord Hood's command center to coordinate the defense of Earth, devastating the unusually small force despite the Covenant being able to board and destroy the Athens and Malta stations and slipping a single CAS-class assault carrier through the defense grid to deploy forces throughout Mombasa after exiting slipspace over the city.[1][10][11] 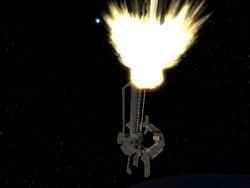 The Moncton platforms would continue to defend Earth even as more additional Covenant fleets began to be dispatched to the Sol system and later when a final overwhelming armada led by the Prophet of Truth finally arrived in November. Despite particularly strong defenses, the final Covenant invading fleet overrun much of the orbital defense grid and the Home Fleet, disabling or destroying the mass of remaining orbital defense platforms as it was weakened by the previous Covenant fleets.[6][12][9] Cairo Station remained intact, but was left damaged after the final space battle.[6] When the Forerunner keyship Anodyne Spirit jumped to Earth on November 17, Nassau Station tracked the Tykos 30 in Ruwan Ackerson's bloodstream to identify Harbinger of Piety as a priority target and destroy it, killing the Minister of Inquisition.[13]

By the war's end, Cairo Station was one of the very few Moncton-class OWPs to survive the month-long orbital space warfare campaign in late 2552. It remains a key part of of Earth's orbital grid, alongside newly-constructed replacements for the Athens and Malta platforms.[6]

An unknown number of platforms continued to serve in Earth's defense grid until they were targeted and disabled by Cortana during her subjugation of Earth.[14][15]