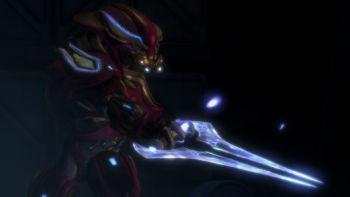 "A noble and ancient weapon, wielded by the strongest of Sangheili, requires great skill and bravery to use, and inspires fear in those who face its elegant plasma blade."
— Supreme Commander Thel 'Vadamee[1]

Energy swords, sometimes known as plasma swords,[2][3] are a class of single-handed, double-bladed energy weapons developed by the Sangheili.[4] To their users, they are formally designated as fireblades,[5][6] and nicknamed plasma blades.[7] The Office of Naval Intelligence has typically type-classified encountered energy sword variants under the designation of the Type-1 Energy Weapon/Sword (T-1 EW/S).[8] Nicknames for the energy sword includes Katana and Kill Beam.[9] 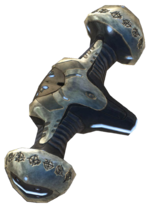 The hilt of a deactivated energy sword.

An energy sword's twin blades are superheated plasma contained in a tightly configured magnetic field generated from its grooved hilt.[4][10] Within the hilt, there is an energy storage device that doubles as a field generator,[8][11] which, when activated, projects the blade, with the stabilized superheated plasma being enclosed in magnetic lines extending from the hilt.[5][12][13]

The weapon is powered by a small battery that supplies power to both the plasma generator and the magnetic field generator.[14] The battery's energy is reduced for each successful strike. Each strike from the sword will drain the battery by 10% of its maximum energy output. Once the battery power is fully depleted, the sword will deactivate unless recharged. The horizontal hilt forces the wielder to use a punching motion to stab rather than the thrusting motion of most knives and swords.

Some variants, notably the Pelosus-pattern energy sword, contain a fail-safe mechanism that can permanently disable the weapon if the Sangheili wielder drops it.[15] When dropped, the failsafe engages by deactivating the magnetic field before dispersing the plasma. The plasma then consumes the handle and thus destroys the weapon. The fail-safe is included to prevent enemy from acquiring the weapon and using it.[16]

Mass-produced models generally feature a simple hilt design, but more individualized models can be quite ornate. Different patterns are typically expressed through the shape of the blade; different contours can have either smooth curves or elegant angles. Furthermore, the color of the superheated plasma can vary with no functional difference as well, though most energy swords glow with a blue tint.[11][17] Sangheili blademasters are often commissioned to create ornamented and hand-customized for elite individuals.[5] As such, drastic variations have been observed. For example, Arbiter Ripa 'Moramee's matching pair of custom-designed swords had basket-style hilt guards and radiated a high degree of ionized plasma,[18][19] whereas most energy swords contain the blades' plasma with greater efficiency. Arbiter Thel 'Vadam's personal sword, the Prophets' Bane, was pale salmon-colored and had a wider blade compared to mass-produced swords.[20][21] Ancient energy swords are marked by their creator and first owner, but often their legacy is forgotten.[22] 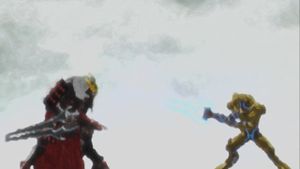 The energy sword's design is seen as the logical evolution of an ancient lineage of traditional Sangheili weapons, most notably the twin-scythe and the curveblade;[5][17] superficially, the ancient melee weapons' influence on the energy sword's design is unmistakable.[23] The sword was originally crafted from hardened resin found in trees which lined the coastal territories of Sanghelios, but as they began carefully exploring Forerunner technology, the weapon was refined over time using Covenant technology, eventually taking its current state.[4] Technologically, the energy sword succeeded an older type of Sangheili sword known as the burnblade, which was created by the arm masters of Qikost—one of Sanghelios' moons—in the early period of Sangheili interstellar expansion,[5] and was used in the early years of the Covenant.[24] Modern energy swords are manufactured by the Merchants of Qikost, a prominent group of arms makers on Qikost.[10][13][25] Prior to the fall of High Charity, they were also manufactured in the city's Assembly Forges.[5][11] Following the Great Schism and the dissolution of the Covenant, the designs templates and existing models of energy swords from the Covenant were inherited by its splinter factions.[10]

Closely aligned with the Sangheili's rigid sense of honor,[25] the energy sword is the signature weapon of the Sangheili, and its usage has historically been regarded as both an expression of a Sangheili warrior's clerical honor and his personal combat skills.[12][17] The Sangheili pride themselves on their skills with the weapon,[26] which they regard as holy, and believe that it is better for a Sangheili to fall on his sword to redeem his honor than to die dishonorably.[27][28][29][30] Pzish'zawk is the martial art form which consists of the use of dual wielded energy swords. Mastery of the practice earns one a high level of renown in Sangheili society, and is a skillset sometimes associated with those assigned the title of blademaster.[31]

A Zealot impales Junjie Chen with an energy sword and lifted his body in the swing during the Battle of Circinius IV.

Since the weapon utilizes shaped plasma rather than traditional solid matter, the energy sword lacks any solid material in which to hold or impale anything; the sword does not cut or carve in the traditional sense, but rather boils anything it comes into contact with.[9] The blade's edge is therefore extremely volatile, being able to slice through even the toughest metals like a hot knife through butter, including ODST armor and the Titanium-A class plating of UNSC destroyers.[32][33] Injuries caused by the weapon are often gruesome. Stab wounds by the energy sword are, in most cases, fatal, as the blade passes through the body, leaving the organs and tissues cauterized by the extreme temperatures produced by the blades.[34] Body fluids in the area of the stab wound are flash-vaporized upon contact; organs within the area of the stab wounds can suffer life-threatening damage dependent upon which organs are struck. The effects of fluids trapped in organs or arteries and the expansion of heat could lead to ruptures or small explosions, causing additional damage to the victim.

Survival is minimal at best and in the case of non-lethal strikes being administered, proper medical treatment must be applied as soon as possible to ensure permanent survival. Because of the weapon's sheer destructive damage, common forms of fatality to victims include total impalement,[19][35][36] loss of limbs,[37] bodies being bisected,[38][39] and even decapitation.[40]

The weapon's most glaring downside is that it is purely a close-quarters weapon; any combat engagement outside of the effective range puts the wielder at risk. It is for this reason that the Sangheili approach sword combat on the battlefield in two different ways, by funneling the enemy into close-quarters to allow them to strike, and/ or to apply a form of stealth using both technology and technique. Without these, the user is vulnerable to attack by all forms of ranged attack, especially from sniper-based counterattacks.[9] Furthermore, the energy sword can sometimes expose the position of a Sangheili warrior employing active camouflage due to the weapon's energy output.

The Sangheili are very strict on who can be trained in the art of swordsmanship; in civilian life, only aristocrats are permitted to wield energy swords.[25] Sword wielders are not eligible for marriage, though they may breed with any female they choose, married or otherwise, to ensure that the genetic material which result in sword-wielding traits are properly transmitted to each subsequent generation.[4][41]

Within the Covenant military, use of the energy sword is not restricted to aristocrats.[25] Sangheili Minors are generally not permitted to wield the sword because of the high regard in which it is held,[27] though exceptions have been witnessed.[42][43] Storm troops,[44] Ultras, Zealots, Generals, special operation officers, stealth troops, and honor guardsmen commonly use energy swords.[25][45] Some Sangheili special forces units, notably the Silent Shadow, employed bloodblades, blood red-colored energy swords which burn hotter than more common models.[11][17][46]

Within the Banished, there is no enforced uniformity for the energy sword, allowing each warrior to customize their weapons to their own needs.[10] That being said, the most common variants appear to be the Domotos-pattern and the Meluth'qelos-pattern.[47][48]

Covenant Sangheili with energy swords in Halo: The Television Series.

Meluth'qelos-pattern energy sword are used by Covenant Sangheili against humanity.

The energy sword was first introduced in Halo: Combat Evolved, albeit unusable by players. It was then made available to players in Halo 2 and has become a mainstay weapon in series ever since. The energy sword is a powerful melee weapon in close-quarters combat, capable of killing most foes with a single strike. It is a power weapon that appears on some multiplayer maps.

There are two ways to attack with the energy sword. The first is a simple melee, this performs a quick horizontal or overhanded swipe. The second attack is to lunge with the energy sword, allowing players lunges forward at the enemies. However, this require the player to initiate an attack when the aiming reticule turns red, indicating that the opposing player is within range. A depleted energy sword hilt can still be used offensively. While the damage varies, it has a higher melee rate than any weapon, allowing the player to barrage an enemy with many hits. Once the hilt is swapped for another weapon, however, it cannot be picked up again and often vanishes entirely.