The Sicatt Workshop Volt Caster[1] or Disruptor is an electricity-based weapon utilized by the Banished during the Battle for Zeta Halo.[2]

The volt caster is a pistol of Jiralhanae design, created by the Sicatt Workshop and manufactured by the Armory of Reckoning. The weapon is designed to fire in a full automatic mode of fire, discharging a small active-dynamo munition capable of attaching to surfaces, including infantry and vehicles. Once attached, the bolts discharge a high-output current to their target, which are capable of incapacitating and immobilizing enemy targets. Should several individual bolts become attached to the same target in a close enough vicinity to one another, they are capable of detonating in a manner similar to that of needle weaponry—causing a large shock explosion that can incapacitating infantry and disabling technology via an electromagnetic pulse.[1]

The top-mounted magazine of the disruptor holds ten bolts before needing to reload.[1]

The Disruptor was used by Banished forces on Zeta Halo during their long-term occupation of the ringworld. Banished forces typically find the weapon's main use in infiltration packs - with scout forces using them to disable enemy technology for long enough durations as to allow regular shock troops to overrun them.[1]

The Disruptor is a fully-automatic pistol that deals shock damage like the Dynamo grenades and the Sicatt Workshop shock rifle. Although the individual rounds deal a little damage to a target, 3 shots to the same target initiates a DOT (damage over time) effect that drains shields first before draining health. The weapon is also capable of disabling vehicles after seven hits have been landed on a given target. In the campaign, the Disruptor is wielded by high ranking Unggoy, Kig-Yar, and used as a backup weapon for Jiralhanae Snipers. In multiplayer, the Disruptor is capable of killing an enemy Spartan in 6 shots. 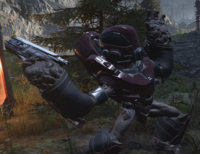