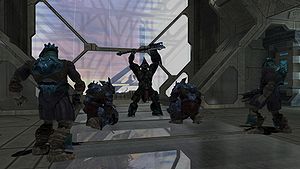 A Brute Pack led by a Chieftain.

The pack, or tribe, serves as the most fundamental building block of Jiralhanae society, acting as a part-familial and part-military unit led by a dominant alpha male,[2] or alpha prime.[3] Within military structures, a pack can serve as a somewhat equivalent of the United Nations Space Command concept of a squad,[4] or the Covenant concept of a lance.[5]

A pack functions as the fundamental unit of society for the Jiralhanae, and can take a number of forms including familial units and collections of close-knit warriors who fight and die for one another on the battlefield.[2] The nature of these functions can change the internal workings of the pack's internal structures wildly - something which was subject to massive upheavals following the introduction of the Jiralhanae into the Covenant.

Traditionally, packs are led by an alpha male who exhibits great authority over the tribe. These elders act as spiritual leaders for the pack and perform religious functions for the group as much as they lead the pack in other matters.[6] These units are commonly bound together for mutual self-defence, ideological consensus or simple familial ties. The strongest packs are led by an official known as a chieftain, who in turn form ties with weaker groups to form the backbone of a clan.[2][7] Following their induction into the Covenant, the title of Captain was created, and these lesser officers were tasked with leading packs of warriors in battle under the tutorage of their Chieftain commanders.[3] This title was retained into the reign of the Banished, with Captains charged with leading packs on raids.[7]

Packs follow a patriarchal social structure under their given alpha, which is loosely followed depending on the social, martial, and sexual success of the patriarch. Should a given leader begin to prove unworthy or unpopular with his subjects, he will be challenged by one of his subordinates - usually a Captain or his own son. The two will proceed to have a duel, with the victor taking the new position as alpha while the loser is killed. As such, patricide is a common side effect of pack succession customs.[8] Should a challenge be made toward a leader, it cannot be taken back - ensuring the two will fight to the death.[9]

Jiralhanae who choose to forgo the pack social system are considered deviants of the highest order.[4]

As with most Jiralhanae social structures, the specifics of a pack's internal organisation are not strictly defined. For example, the pack directly led by Chieftain Maccabeus consisted of ten Jiralhanae.[6] However, the size and influence of a pack can wax and wave depending on the influence and social status of the pack leader; those with the title War Chieftain command larger packs than Chieftains,[3] and in general packs led by a Chieftain are stronger than lesser packs.[2] Chieftains employ enforcers known as bodyguards, who act as enacters of the Chieftain's will and keep the pack members in line, with Stalkers working in a similar role to protect the Chieftain through covert means and act as the Chieftain's personal spy.[3]

However, while this structure was applicable to the role of the pack within the Covenant, this was the result of an attempt by the Prophet of Truth to fuse the traditional Brute social structures with pre-existing military traditions already in place and long-defined by Sangheili pre-Covenant structure. For most of their tenure within the Covenant military, Brute packs operated as insular units with a notable uncooperative nature toward the orders of their non-Chieftain superiors, leading to them being deployed wholesale as shock infantry units with a perchance for excessive violence.[10] This changed with the Changing of the Guard and the ascension of the Jiralhanae to the Covenant's primary military caste. Following this upheaval, combat-oriented packs were often led by Captains, Captain Majors or Captain Ultras, who led the pack in battle.[3] Minors, Majors and Ultras formed the bulk of standard pack infantry under their Captain or Chieftain superiors, and in turn were charged with leading lances of lesser-caste species.[3] The Jiralhanae assigned to piloting Covenant aerospace strike craft such as the Seraph often formed close-knit packs, carving their clan sigils into the hulls of their war machines and fighting, eating and dying alongside one another.[11]

Following the Covenant's collapse and eventual fall, many of the Covenant-implemented military ranks such as Minor and Major were abandoned by the Jiralhanae for a return to their traditional roots. Within the military forces of the Banished, the role of the pack remains largely independent, as Atriox seeks to prioritise individual autonomy over blind adherence to a limiting structure as in the Covenant. As such, packs display much greater variation across the organisation,[12] though some trends are notable. Within the Banished military hierarchy, packs occupy a position similar to that of a lance - a constituent unit of a combat element, which in turn comprises a clan.[5] The Banished have not completely abandoned the older Covenant military structure, though have adapted it to their own usage; for example the Banished retain the title of Captain, with these low command officers tasked with leading raiding packs for the Banished.[7]