"What is the greater sin, disobedience or desecration?"
— Maccabeus to Dadab[3]

Maccabeus was a Jiralhanae war chieftain and one of the few Jiralhanae shipmasters of the Covenant prior to the Great Schism. He was honored and respected by his pack for his unshakable faith in the Forerunners. He was also the uncle and precursor to the future Chieftain of the Jiralhanae, Tartarus.

Maccabeus ascended to the leadership of his pack the way all Jiralhanae did: by challenging his Chieftain, at the time his own father. In a mortal duel, Maccabeus's father submitted to his death, happy to die by the hands of a loved one. He thus gained the right to use the Fist of Rukt, the ancestral weapon of his clan.[4] With the war hammer, Maccabeus crushed all opponents that attempted to challenge his command.[5] When the Covenant discovered Doisac, Maccabeus eagerly embraced the San'Shyuum's promise of the Great Journey.[6]

He was given command of the Covenant vessel, Rapid Conversion, a ship that the Sangheili had "given" him, though the Sangheili did downgrade it severely, showing their distrust in the Jiralhanae. However, he upstaged the Sangheili by taking his rebuke in turn. He was not allowed to repair any weapon systems and he was not allowed to have a Huragok on board, instead having Yanme'e serve as maintenance. Although he was allowed to have a mechanical lift system on his ship, Maccabeus decided to remove it and replace them with multiple, crude ladders as a deliberate affront to the Sangheili, as the digitigrade structure of their legs gave them great difficulty when climbing.[7] Another reason why he preferred the ladders as it enabled more of his crew to travel up and down simultaneously, and also humbled him.[8] 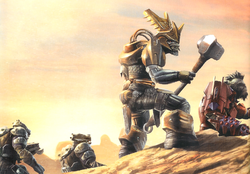 Maccabeus with his clan on Harvest.

In February 2525, at the command of the Vice-Minister of Tranquility, Maccabeus took Rapid Conversion to the planet Harvest, site of a supposed Forerunner reliquary. Recovering the Deacon Dadab and Huragok Lighter Than Some, Maccabeus was shocked by the Huragok's ability to fix things and eagerly made it chief Engineer, relieving the Yanme'e.[9] Maccabeus' assessment of the planet with the ship's Luminary showed thousands of relics, but the devout Chieftain was soon shocked to learn that Dadab believed that there was an Oracle located on the planet.[10] Recovering a pictogram message left by the humans, Maccabeus took four of his pack to the planet to meet with the humans.

Maccabeus was one of the first official representatives of the Covenant to meet with the humans. However, the talks went sour when an overeager Unggoy, led by Tartarus, broke rank and made an early attack on a group of militia recruits. One Unggoy attacked a recruit named Osmo. When Osmo caught a glimpse of his attacker, he attempted to open fire, but it was already too late. The Unggoy split Osmo open across his belly.[11] After confirming that there was an Oracle on the planet, Maccabeus sent a message to the Vice-Minister. However, the response the Chieftain received said that there were no relics or Oracle, and that the aliens were to be destroyed.[12]

Unable to reconcile the orders of the Prophets with his own faith in the Forerunner's Luminary, Maccabeus decided to continue his search for relics, something which the rest of the pack disagreed with. Descending to Gladsheim to begin their search, Maccabeus was severely injured in battle when he was hit by Staff Sergeant Johnson's Warthog and suffered a broken thigh bone.[13] Returning to the ship, Maccabeus found that Lighter Than Some, who wanted to make peace between the Covenant and the humans, had built some plows from a Spirit damaged when it and Dadab had been brought aboard. Having feared he would be killed for the Huragok's disobedience, Dadab said that they were vehicles of war for the Jiralhanae.[14] After Dadab took the Huragok to the Tiara for safekeeping when the Yanme'e attacked it, Lighter Than Some made contact with Loki and set a trap to help the humans escape Harvest.[15]

Being lead to believe that the humans were surrendering the Oracle, Maccabeus took the Rapid Conversion to Harvest's capital city of Utgard. However, the Rapid Conversion was damaged by the planet's mass driver as the humans fled aboard the Tiara.[16] Believing this was enough, Tartarus challenged Maccabeus for dominance of the pack. Having yet to fully heal from his injury, Maccabeus was overwhelmed. Maccabeus' last words to Tartarus were: "Never forget the meaning of this Age, nephew." Tartarus then crushed Maccabeus' skull with the Fist of Rukt while he clung onto a ladder. Maccabeus' body plummeted into the explosions and fires below. Tartarus returned to Maccabeus' body and stripped him of his Chieftain armor.[17]

Maccabeus was deeply religious, often quoting religious scripts. Maccabeus thought that it was belief that made a warrior, not skill.[18] When Rapid Conversion's Luminary stated that oracles were located on Harvest's surface, Maccabeus scoured the planet in search for them. Even after most of his pack wished to glass the planet from orbit to destroy the humans, he refused to do so as he believed the oracles would get destroyed. Like most Jiralhanae, Maccabeus held a hatred for the Sangheili. When the Sangheili stripped his ship of most technology, Maccabeus removed the elevator and replaced it with stairs to make it harder for the Sangheili to traverse across the ship.[7]

He often had the Unggoy aboard the ship prepare a Thorn Beast meal for him and the other Jiralhanae. His favorite portion of a Thorn Beast was the smallest spine on its back when properly cooked.[19]