Doisac, designated CE-75-2113 c by the Forerunners,[5] was the third planet of the Oth Sonin system and the homeworld of the Jiralhanae. The planet possessed three natural satellites, Warial, Soirapt, and Teash.[1]

Doisac was a tropical world, where volcanic activity was common. At least half of Doisac's surface was covered in rain forests, while the other half was largely composed of molten rock, lava, and large volcanoes. Doisac had a very harsh environment, yet it was still preferred by many Jiralhanae.[6] The rocky, forested planet also contained large amounts of deserts, and a few seas of water.[7]

A map of the planet.

Its environment was very Earth-like, with forests and oceans, although its gravity was twice that of Earth. It has been noted, however, that its terrain was dominated by magma and magnetism, hinting at high tectonic activity and rich magnetized iron deposits. It is possible that Doisac was closer to Oth Sonin than Earth is to Sol because its surface temperature/climate was slightly more tropical, ranging from -15 °C to 52 °C (5 °F to 125.6 °F). Alternatively, its atmosphere may have caused a greenhouse effect, either due to the actions of the Jiralhanae or naturally, trapping heat and warming up the planet in a similar fashion to Venus.[1]

The planet was orbited by three natural satellites; Soirapt, Warial, and Teash. The latter two[8] were industrialised and populous.[2]

Because of its harsh environmental conditions, numerous predators evolved on Doisac throughout its history, among them the initially arboreal Jiralhanae.[9] Doisac was visited by the Forerunners during the Lifeworkers' Conservation Measure. The Jiralhanae were one of many sentient species indexed by the Librarian for preservation aboard Installation 00. After the Halo Array was fired, the Jiralhanae were returned to Doisac to begin rebuilding their culture.[10]

Doisac was a very war-torn land due to constant Jiralhanae civil warfare, typically between clans. Despite their savagery, Jiralhanae proved intelligent enough to achieve spaceflight and space-faring status. However, their warlike nature inevitably led them into conflict, and eventually the various Jiralhanae master-packs fell into a massive war known as the First Immolation. The planet became heavily damaged from the use of nuclear weapons and almost led to the extinction of the Jiralhanae.[9][11] The First Immolation failed to stop conflict, however, as the Battle of Gbraakon took place on Doisac at some point after that.[12] With Jiralhanae society collapsed, by the time the Covenant discovered them in 2492, the species had just rediscovered radio and rocketry. In their primitive state, they were quickly defeated and absorbed into the Covenant.[13]

After their induction to the Covenant, many Jiralhanae left Doisac to settle on Covenant colonies or live on High Charity.[6]

During the months of the Great Schism, Doisac was presumed to be a spot for battles between the Covenant and the Sangheili.[14]

Although most Jiralhanae returned to Doisac after the war,[9] many also continued to inhabit the worlds the Covenant had previously given them; however, due to their lack of advanced technology and their disorganized society, they were unable to obtain resources or even food for themselves resulting in famine, and instead resorted to raids on Sangheili colonies.[15] The Vheiloth Jiralhanae saw the raids as a necessity, while the Rh'tol Jiralhanae glorified their piracy as power over the Sangheili for oppressing them.[16]

The Jiralhanae on Doisac lacked a strong leader to stabilize them since the Covenant's fall,[17] with the various infighting master-packs putting them at a disadvantage in their ongoing conflicts against the Sangheili.[18] One of the planet's governing master-packs, the Children of Oth Sonin led by Lydus, provided security and provisions to the outlying citadels across across its star system.[19] The Voice of Maardoth was a weak tribe by comparison and relegated to Doisac's outlands. Its leader Remarus was killed by Hekabe who usurped the tribe, leading the Voice of Maardoth to grow in power. Prior to 2558, a mercenary organization known as the Banished had attacked a number of settlements on Doisac for resources and to claim them as their own, killing the rivals of their leader Atriox and impressing independent clans.[20]

Due to imminent famine on Doisac in March 2558, Lydus and his Children of Oth Sonin were willing to attempt peace negotiations with the Swords of Sanghelios mediated by the UNSC on Ealen IV, until they were interrupted by a mercenary attack. The peace negotiations were left at a standstill.[15] By October 2558, a mass power consolidation had begun to take form on the planet under the Banished, leading the UNSC to consider targeted strikes to prevent this unification.[3] The Banished's leader Atriox had become a symbol for some Jiralhanae on the planet to rally behind with some joining him.[21] Despite this, many Jiralhanae rejected joining due to their hatred of the Sangheili in the mercenary organization.[22] Working alongside Sangheili was frowned upon on the Jiralhanae homeworld.[23] The Children of Oth Sonin hired the Banished as a mercenary force to take out Lydus' rivals, supplying them with shipyards and land as payment.[24] 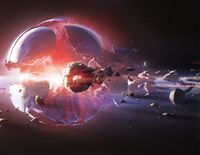 "Look upon Doisac one last time and remember: You chose this path."
— Cortana as she prepares to destroy Doisac.[25]

Following the The Reclamation in 2558, many Jiralhanae were unwilling to give in to the new Created threat. Instead, the Banished united with various clans across the planet and its moons and fought back against the Created while Jiralhanae infighting continued.[26] Cortana called on the Banished leader Atriox to submit. When Atriox refused her, she responded by sending multiple Guardians to fire beams at the planet, resulting in its total destruction.[25] With the planet's physical destruction, its shards slammed into and damaged its moons.[26]

Following the destruction, the planet's cooling husk was described to be rich in materials capable of fueling generations of reprisal.[27] Some members of the Children of Oth Sonin continued to lurk in the shadows of the system.[24]