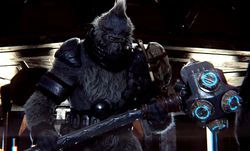 Tartarus, one of the most important Jiralhanae part of the Rh'tol skein during the Human-Covenant War.

The Jiralhanae of the Rh'tol skein came into conflict with the more sophisticated Vheiloth skein, resulting in a brutal, decade-long civil war known as the "First Immolation", initiated by Chieftain Rukt of the Rh'tol skein.[3] The war set Doisac ablaze and almost brought the entire species to extinction by the use of nuclear weapons. After the First Immolation, both skeins were driven back several hundred years in science and machinery. Both sides would bear survivors, who would later come to fight the Covenant upon its arrival.[1] The Jiralhanae of the Rh'tol skein did not care much for technology, and were not troubled by the loss of technology their civil war brought. Many feared that the species had become too dependent on technology.[4]

When the Covenant arrived to Doisac and absorbed the Jiralhanae in 2492, the members of the Rh'tol skeins adopted the Covenant philosophy, but only believed for strictly practical reasons, ultimately the result of blind subjugation to power. This generated a cultural friction and competitive infighting common to their kind, but for the time being, these tensions were controlled by Covenant leadership.[1] Many Jiralhanae of this skein never completely believed in the Covenant religion or the Great Journey. Some looked upon the San'Shyuum with disdain for giving the Jiralhanae access to advanced technology, as these individuals did not want their species to become reliant on it.[4]

At the beginning of the Human-Covenant War, the High Prophet of Truth covertly assisted Tartarus, a chieftain and a member of the Rh'tol skein, with gaining authority in the Covenant empire. Soon, Tartarus controlled a majority of the Rh'tol skein, and later elevated to a position of command over all Jiralhanae in the Covenant. Ultimately, Truth placed Tartarus in command of the Covenant military, installing Jiralhanae to positions typically held by Sangheili. Truth then armed and position Tartarus and his Jiralhanae to initiate a coup against the Sangheili, leading to the Great Schism, a civil war that tore apart the Covenant. The resulting conflict brought an end to both the Covenant Empire and the Human-Covenant War, with the death of Tartarus.[1]

After the fall of the Covenant, many Jiralhanae returned to Doisac.[1] The Rh'tol soon came back into conflict with the Vheiloth, once again engulfing Doisac in disorganized civil war. The lack of resources on Doisac and nearby interplanetary colonies led to many Jiralhanae being forced to raid the Sangheili's frontier colonies for supplies. Some Jiralhanae of the Rh'tol found glory in committing piracy against the Sangheili, believing that it let them show their true strength to the same species that had oppressed them within the Covenant.[5]