The Chieftain of the Jiralhanae, Tartarus was killed by Thel 'Vadam, his Sangheili allies, and Sergeant Major Avery Johnson on Installation 05. He wielded a powerful ancient and unique gravity hammer, the Fist of Rukt.[13] Preceding him was his uncle Maccabeus, the previous wielder of the Fist of Rukt. Maccabeus's death was at his young nephew's hands, as is the tradition within the Jiralhanae culture: a fight to the death over the Chieftain position within the pack. The same can likely be said for most Jiralhanae Chieftains unless the previous Chieftain fell in battle; however contestants may have had to fight to the death for the position if this was the case. This was known to have happened on at least one occasion during the Jiralhanae occupation of the colony Beta Gabriel.

Due to animosity stoked by the Great Schism, the Jiralhanae and Sangheili typically did not work together after the war, at least not as equals.[14] For reasons unknown, a few Jiralhanae Chieftains would eventually join Merg Vol's Covenant as lesser infantry after the end of the Human-Covenant War. These few Jiralhanae would fight on behalf of the group during the Battle of Draetheus V in 2554.[5] Very few Chieftains were depicted serving Jul 'Mdama's Covenant in a UNSC Tactical Simulator set during the Battle of Installation 03 in 2557.[6]

Jiralhanae Chieftains are typically clad in resilient ornate crimson and black/silver armor and are instantly recognizable by their matching large horned headdress, a design which pays homage to the Degaeorth of Doisac.[17] However, there's varying types of armor favored by Chieftains,[1][18][4] including one design of armor that is thicker with its left arm to deliver bone-crushing melee attacks should they need to perform one without their gravity hammers.[1] Another chassis also have dual wrist-mounted blades extending over their hands for extra melee capabilities.[4] While it cannot take as much damage as the bronze, gold-colored armor worn by War Chieftains, it allows greater speed and mobility.[1][18] They are also equipped with renegerating personal energy shields.[18] Their power armor cannot be stuck by plasma grenades, spike grenades, or needler projectiles.[1] However, their armor can be stuck by firebombs and unarmored parts like the Chieftains' weapons, hands, and feet can be stuck by spike and plasma grenades.[1] Unlike the power armor worn by Jiralhanae of lesser ranks, a Chieftain's armor does not fall apart once the shields are disabled.[1] Additionally, their power armor grants Chieftains exceptionally high resistance to energy weaponry; even unshielded.[1]

There is another variant of the Chieftain power armor, which have a different design and better protection than typical types. It had also a techsuit that covers almost the entire body, including the hands.[19] These armors were issued by several high-ranking Jiralhanae leaders such as Avitus, also known as the "Brute Army Commander", and another Jiralhanae Chieftain, albeit the former being also colored entirely in red, opposing red-and-black-colored chieftain power armors, and the latter entirely in blue rather than in red.[19][20] Whenever if either the "Army Commander" term is considered a Jiralhanae title given to several of these Chieftains who wear these power armors or possibly a rank, or simply a nickname given to only Avitus is unknown.

While most Jiralhanae Chieftains were known to have worn power armor, a few were poorly armored, like the bulk of lower-ranked Jiralhanae warriors as a whole until the Great Schism, including Parabum and Lydus.[21][22] 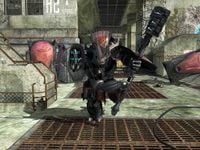 A Brute Chieftain charging towards his opponent.

A Jiralhanae Chieftain's shields are stronger than those of a standard Jiralhanae, but, oddly, are slightly weaker than a Jiralhanae Captain's. Unlike the power armor worn by Jiralhanae of lesser ranks, a Chieftain's armor does not fall apart once the shields are disabled. Additionally, their heavy helmets protect them from headshots, and it requires a handful of shots to the head from a precision weapon to knock off their helmet and leave them vulnerable to a fatal headshot. On any difficulty it only takes one beam rifle or sniper rifle shot to disable their shields, while Jiralhanae Captains require two shots on Heroic or Legendary to bring their shields down. On Heroic, a Chieftain's shield can be brought down with twelve assault rifle bullets or eight plasma rifle bolts. However, even unshielded, a Jiralhanae Chieftain has extremely high durability and can survive incredibly high amounts of damage; on Heroic, it takes forty-three assault rifle bullets, five particle beam rifle shots, or five direct hits from a Brute shot to kill an unshielded Chieftain, whereas any other Jiralhanae rank dies after only one beam rifle shot or one to two Brute shot grenades once their shields are disabled. This makes the durability of Chieftains much closer to that of the Jiralhanae of Halo 2 than any other Jiralhanae unit in Halo 3. Additionally, their power armor grants Chieftains exceptionally high resistance to energy weaponry; even unshielded, a Jiralhanae Chieftain can withstand more than two hundred plasma rifle bolts before falling, while most standard Jiralhanae die after only a little over a dozen plasma rifle bolts once their shields are gone. Their power armor cannot be stuck by plasma grenades, spike grenades, or needler projectiles. However, their armor can be stuck by firebombs and unarmored parts like the Chieftains' weapons, hands, and feet can be stuck by spike and plasma grenades.

The Jiralhanae Chieftain's primary armament is the gravity hammer, although they are also known to use Pez'tk-pattern fuel rod guns, Kopasa'mada-pattern plasma launchers, and Pek-pattern plasma cannons. Jiralhanae Chieftains are the only enemy, aside from the occasional Flood and Sangheili General, who use these weapons. On all level modes, they carry and almost always use the invincibility power-up. It is also possible for them to carry a regenerator, flare, or power drain.

Jiralhanae Chieftains will be closely guarded by two or more Jiralhanae Bodyguards as well as high numbers of Jiralhanae of other ranks, only leaving the security of the pack when they feel it is tactically sound or simply when they thirst for blood. Chieftains generally hang back and allow their entourage of Jiralhanae to do the fighting, generally only charging forward to attack with their gravity hammers after several of their Jiralhanae pack subordinates have been slain.

If they run for you, turn and run as fast as you can. More often than not, unless you've managed to kill them within the first few seconds, they will activate their invincibility if they are carrying one and you will not be able to kill them until it wears off. Chieftains can close distances quickly, and will not hesitate to smack anything out of their path. Though less durable than the more ornate War Chieftains, they are far faster and much deadlier in close combat, and they still boast extremely powerful shields and armor. 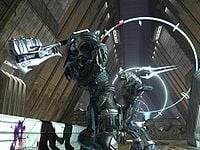 A Chieftain fighting Thel 'Vadam in the Citadel.