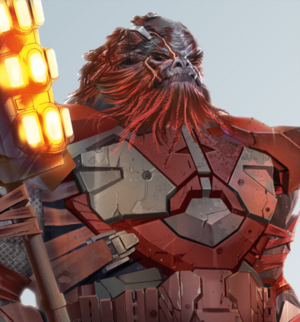 Legionmasters are Jiralhanae senior officers within the military hierarchy of the Banished. They consist of Chieftains and Warlords granted charge of a legion - a clan within the Banished identified as having an unparalleled skill in battle. Legionmasters generally operate directly under the authority of their War Chief, though are entrusted with autonomy to operate independently provided they achieve the goals they are assigned.[1] As is standard within the Banished, legionmasters must often jostle with their fellow competing warlords and shipmasters for position and power within their assigned sphere of influence.[2]