(Redirected from Commander (Banished))
This article is about the Covenant rank. For other uses, see Commander (disambiguation). 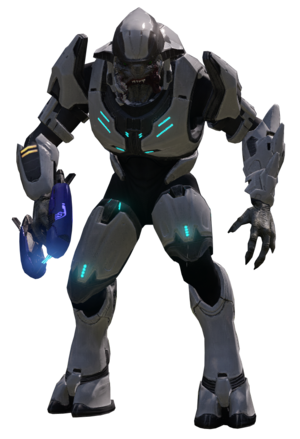 Commander is a military rank in the armed forces of the Covenant, and the empire's remnants. The title is most typically held by the Sangheili.[1] Within the post-war era, the rank of commander has seen prominent usage by Jul 'Mdama's Covenant[2][3], the Swords of Sanghelios[4] and even mercenary outfits such as that led by Vata 'Gajat and the Banished.[5] 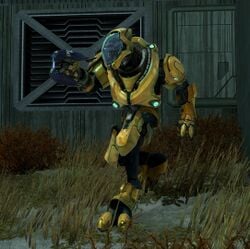 Within the Covenant of old, the rank of commander (and below it, sub-commander) allowed the Sangheili to maintain unit cohesion across species.[1] They represent the primary leadership of the Covenant in ground engagements, and provide overall strategic direction to the Sangheili, Kig-Yar and Unggoy units under their command.[6][2]

Following the dissolution of the Covenant, many seasoned and battle-hardened Sangheili went on to form the backbone of leadership within the Covenant's various successor states. For many, this involved becoming commanders of their own successor faction, who in turn formed alliances with one another throughout the Covenant sphere.[12] The more experienced of these warlords, those who served in the old Covenant for decades in both ground and space warfare, became an integral backbone for some of the larger post-Covenant groups, such as the faction led by Jul 'Mdama. Their experience allowed them to rapidly gain respect within the alliance, and power to go along with it.[6][2] 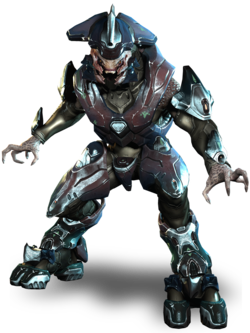 Within the Covenant empire, Commanders serving in Covenant Special Operations employed the Gheocin-pattern combat harness in a grey-white colouration similar to that of the Evocati, and equipped with active camouflage.[7][13] Commanders of Ranger detachments generally employed the standard Tlaipoz-pattern and Ebgione-pattern exo harnesses - the former of which would be worn in a gold colouration.[14][15] The precise preferences of mainline Covenant military commanders are unknown, though they may have employed harness designs in a gold command colouration similar to generals and Zealots.[16]

Sangheili Commander harnesses - particularly those used by post-war groups such as Jul 'Mdama and the Swords of Sanghelios - can be described as a more sophisticated set of the Storm harness with both sporting the same lower body armor and chest harnesses of Hesduron aesthetic principle; Commanders on the other hand wear more angular shoulder-pads, wrist-guards, a smooth bodysuit and a much more ornate helmet. Commander harnesses appear similar to the suits worn by Sangheili Officers of the original Covenant in terms of design, although the Commander's set is colored a deep claret compared with the Officer's scarlet.[6] They can also occasionally be found in a green[17][citation needed] and gold[18] combat harness. The raised claw on their boots are reminiscent of ancient ceremonial armor.[6]

Though, it has been seen that few known post-war Commanders have worn different armor. In the case of Gek 'Lhar, he wore the Storm harness without a helmet. In the case of Parg Vol and Kitun 'Arach, they wore the standard Warrior harness used by Jul 'Mdama's Covenant.

The deployments of Covenant-era commanders are little-known, and thus their particular preferences are similarly unknown. Commanders in SpecOps units, such as Rtas 'Vadum, were prominent swordsmen and made heavy use of the energy sword.[7]

Commanders within Jul 'Mdama's Covenant group have been known to wield both the infamous Vostu-pattern carbine and the devastating Zebando'Taa-pattern concussion rifle. They rarely engage enemy forces without heavy firepower at their disposal.[2]

Sangheili holding the rank of commander appear primarily across Halo 2 and Halo: Reach in minor roles, with Halo 4 and Halo 5: Guardians heavily expanding on the concept.

Ranger Commanders appear in Warzone on the map Escape from ARC. Two spawn as the second boss on the level, one in each tunnel of the East and West Armories. Each is accompanied by two Sangheili Rangers. They are armed with storm rifles and throw plasma grenades. Killing one will award the team 25 VP, and earn the player a Boss Takedown medal.[21] As most simulated Sangheili bosses in Warzone, they do not wear their correct harness, in their case the Ranger variant, instead sporting the Warrior-class harness if Legendary or the Commander-class harness if Mythic.

This rank is often titled "Special Operations Commander" (or similar) in various works, though much of this comes down to an oft-repeated misconception on the part of the Halo fanbase and older pages on Halopedia. The term "SpecOps Commander" was used throughout the production of Halo 2 to refer to the character of Rtas 'Vadum, who had not been named at the time. This labelling can be seen in the game files for the character tag, and even in published media such as the Halo 2 strategy guide (a source with dubious canon authority) and the Halo Graphic Novel commentary for the story The Last Voyage of the Infinite Succor, in which author Lee Hammock refers to Rtas as "the SpecOps Commander".[22] Crucially, the story itself does not refer to the rank of "SpecOps Commander" at any point, only referring to the characters of Rtas 'Vadum and Bero 'Kusovai as commander and sub-commander, respectively.

In-universe sources for the rank of "SpecOps Commander" were first published in the Halo Encyclopedia (2009 edition) and repeated in its 2011 reprint, which discuss Rtas 'Vadum as having "been reassigned to the position of SpecOps Commander".[9] This is repeated in the Essential Visual Guide page on the character with mostly identical wording; neither of which discuss the rank as a particular title and can be easily interpreted as referring to a Special Operations Commander in the same way one may refer to an "SAS General". Given the many errors present throughout the 2009 encyclopedia, this source is generally considered untrustworthy should alternates be available. Within the EVG itself, Rtas' explicit rank is given as Shipmaster, with the term "SpecOps Commander" only ever used as a general descriptor.

More recent media published by 343 Industries has almost entirely neglected to mention the idea of the "Spec Ops Commander"; the first mention within more recent media occured in the 2016 novel Halo: Envoy during which Rojka 'Kasaan refers to Keza as "one of his special operations commanders" - with no capitalisation, suggesting the title is not intended as a proper noun, but instead a general descriptor.[23] More recently, the Halo Encyclopedia (2022 edition) discusses the ranks of commander and sub-commander as general ranks employed throughout the Covenant military in a similar fashion to Major or Minor,[1], while the book's page on Rtas 'Vadum explicitly states he "served as a Special Operations commandeer" - explicitly avoiding to call him a Special Operations Commander, presented as a proper noun.[24] Given that the concept of a Sangheili Commander rank was fully established within Halo 4 (and its supporting media such as the Interactive Guide and Halo 4: The Essential Visual Guide), it would seem that the concept of a Special Operations Commander rank was based on a misreading of game data and ambiguous wording in early Halo media, and one 343 Industries has consciously gone out of their way to retcon/ ignore.

In Halo: Reach, Rangers holding the rank of commander appear in-game infrequently as part of the BOB easter egg. In select levels, gold-clad Rangers may spawn as part of the easter egg. It was not until a 2015 post on Halo Waypoint that the gold Rangers were canonised as Ranger commanders.[11] In the post-game carnage report of Halo: Reach, this type of Sangheili was referred to as "Elite light vehicle".