This article is about the Covenant military rank. For the general concept of Covenant commissioned officers, see Obedientiary. 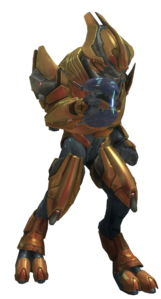 Officer was an Obedientiary military rank held by Sangheili forces within the armed forces of the Covenant empire.[2][3][4] The title exists as a class byproduct of the Major rank, and has few real practical differences beyond the more decorative ceremonial battle armour the officers employ. Like Majors, Officers report to an on-site Evocati official, and may be charged with the command of lances consisting of lesser-ranked Sangheili, Kig-Yar and Unggoy.[5] Unlike Major, the Officer role has only ever been seen observed in use by Sangheili troops.[6]

As a byproduct of the Major role, Officers wear more ornamental armor, which functions with no substantial differences to Major Sangheili equipped with the standard combat harness.[5] The officer harness features much more pronounced shoulder pauldrons and a more elaborate helmet with a backward-swept spike in the center.[6] The design is more standardized than that of ordinary Majors, varying only in color. One color scheme is blood red with a golden tinge and brass-colored highlights;[6] another is matte burgundy with white accents on the arms and legs, the collar, and the helmet.[7]

In the post-war era, United Nations Space Command forces have simulated combat against Officers via War Games simulations. In these simulations, Officers are deployed in Commander harnesses

Elite Officers were introduced into the Halo series in Halo: Reach. In-game, Officers serve as the replacement for the series' classic Elite Majors, though have no particular gameplay differences outside of cosmetic changes. In Halo: Combat Evolved Anniversary, Officers were used to replace the Majors in the game, albeit with a crimson red colouration as opposed to Reach's bronze orange. In Anniversary's Library function, these elites are still identified as Majors.

In Halo: Ground Command, Officers are available in the Covenant Command Pack.[4]