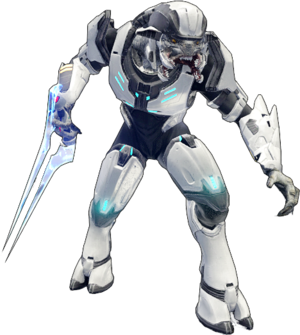 Evocati are an order of highly-skilled warriors employed by the Covenant and, following the empire's dissolution, its remnants. Among human forces, the Evocati are known as Ultras, and can be drawn from a number of species.[1][2] However, the role was most-widely adopted and known as a Sangheili title.[3]

Evocati consist of the foremost skilled warriors available for their given martial organisation to call upon. While Minors who favour command and leadership-oriented work may begin to climb the ranks of the Obedientaries, the Evocati instead take in veteran warriors who have demonstrated the highest standards of military proficiency, teamwork, honor, and devotion to the Covenant. They generally display above-average aptitude in skill-at-arms and martial tactics.[3][4] While proficient in lone wolf field operations, Evocati may also be utilised as leaders in their own right and given charge over lower-ranked Minors and Majors.[2]

The Ultra position represents the apex of a given warrior's military career; those Sangheili who attain the title consider it a great glory, and are guaranteed a position of honour in the records of their clan and the record vaults of High Charity. However, few Evocati remain in this position for long, as they are generally expected to continue to advance their career in the order of seneschals, enter the political sphere as a councilor or return to their parent ministry to train the next generation of warriors.[3]

Lower-caste species in the Covenant including Unggoy, Yanme'e and (following a decree by the Prophet of Truth) Jiralhanae were equally able to attain the title of Ultra, though due to their lower-caste status were presumably unable to enjoy the same societal benefits and progression available to their Sangheili superiors. It is unclear how these races' Ultras fit with the Evocati hierarchy; their successors in the Banished employ Unggoy Ultras in low-level command roles over other Unggoy to relieve commanders of the task, though they are also often deployed paired alongside Sangheili they have a shared history with.[5]

Among the Sangheili, the Evocati had a number of martial orders, with the Seneschals being one such organisation veteran Evocati could aspire to join.[3] This is similar to the Zealot chapters employed exclusively by the Sangheili - though unlike Zealots all species can attain the title of Evocati.[1] In practice, contingents of Ultras could be attached to a given Warhost by a given commander, though would rarely answer to the force's commanding Field Master directly.[3]

To achieve their mutual goals in the field, Evocati would elect an official "Ultra Officer" from their ranks - termed Evocati Delegatus - to deal with the warhost commander directly. Despite this duty, the Delegatus were not Obedientiaries and did not hold an official command authority in the Covenant military hierarchy - instead serving in a role analogous to UNSC Warrant Officers as subject matter and technical experts in a specific field.[3]

Sangheili Ultras in the field wield a variety of equipment, often employing various styles of harness including (though not limited to) the Gheocin-pattern combat harness and Bausatti-pattern raid harness.[6][7] Evocati serving in Storm units may deploy with Storm harnesses in white and red colouration.[8]

The Ultra role was largely preserved among Banished Sangheili forces, with dozens of Evocati divisions having been recruited into the collective by ex-Seneschal Chak 'Lok.[9] Banished ultras largely echo the Evocati in the Covenant of old, employing harness designs with increased resilience and incorporated active camouflage. Banished ultras have been compared to the arpaktiko warriors of ancient Sangheili history, and are trained to hunt down and kill their targets without hesitation or remorse. As with the Covenant, Banished ultras are rarely attached to their units for long, and are instead employed by their commanding Warlords in a manner akin to living weapons. These warriors rarely hold aspirations beyond dying for the glory of their keep due to their mastery in their favoured fields, and as such are renowned for forging stories for the saga walls in their respective keeps.[10]. They are armed with either Shock Rifles or Heatwaves and always armed with an Energy sword as a backup weapon.

An order of ex-Covenant Evocati led by Colonel Ke 'Nzahz is active in the post-war era.[11]

With the reorganisation of the Covenant military in late 2552, the Jiralhanae were promoted to the primary caste of the empire - taking the role dominated by the Sangheili for three millennia. In this, the role of Ultra was introduced into the Jiralhanae forces as the highest rank attainable for Jiralhanae infantry. Brute Ultras are capable of leading lesser troops, but more typically join their Jiralhanae brethren under the command of Captains and Chieftains.[12] Vostu-pattern carbines are favoured by Brute Ultras[13], alongside cyan-coloured infantry power armor.

Alongside the role of Ultra, the Jiralhanae also introduced it as one of several sub-ranks for their Captains. Jiralhanae Captain Ultras serve as the highest tier of captain, working as pack leaders and donning cyan-coloured leader power armor.[14] The specifics of authority and role for Brute Ultras and Captain Ultras, and how these roles differ from other Brute military titles, are currently unknown. The ranks of the Jumpers may also have their own dedicated ultras.[15]

While no Mgalekgolo have been directly observed with the title of Evocati, several Swarmlords serving in Ke 'Nzahz's Evocati order have been observed displaying Evocati colouration on their armour plating.[11][16]

The Yanme'e were able to join the ranks of the ultras. Depending on unit, this could be signified by the presence of blue and cyan exoskeletons, along with paired forked horn-like structures on their head and cephalothorax. Yanme'e Ultras are often armed with Type-25 plasma pistols, and sometimes Type-33 Needlers.[17] Ultras are equipped with anti-gravity technology that is attached to their wings that allow them to fly freely.[18] Some Yanme'e may instead be distinguished by the presence of a silver-white exoskeleton and a yellow-hued set of antigravity emitters.[19]

The Unggoy were also able to attain the title of ultra.[1] This applied across the original Covenant, Jul 'Mdama's Covenant remnant faction and the Banished.

In the Banished, the role of the Grunt ultra is very similar to that of its Covenant counterpart, though with a few changes. Unlike their imperial predecessors, Banished Unggoy ultras have access to more powerful armour and heavier weaponry, and are considered capable enough soldiers that they may be dispatched on solo missions to achieve objectives. More commonly, they are deployed attached to units of Sangheili with which they share history and are generally eager to prove themselves in battle - though ultimately Banished commanders are very aware of the fact that they are still Unggoy and are, thus, of limited battlefield practical use. As such, they are most commonly deployed as leaders of lesser Unggoy, allowing their commanders to focus on other, more important, matters. The highest-ranking of the Unggoy ultras may be hand-selected to graduate into the role of the Bouncer.[20]

Most recently, a number of Gasgira freed by the Banished during their campaign on Installation 07 have seen promotion to the role of ultra. It is unclear how much the Gasgira ultras' role reflects that of the traditional Evocati - though they are deployed on white armour in a similar manner to their counterparts among other races.[21][22]

The Stalker Rifle Ultra serves as a specialised upgrade of the Elutuzem-pattern stalker rifle, in service with the Banished. It demonstrates a white-silver external appearance, alongside a faster fire rate.[23]

In addition to serving as an infantry warrior role, a number of distinct vehicle variants emerged during the Blooding Years for use by both the Swords of Sanghelios and Jul 'Mdama's Covenant. These include the Ultra Ghost, Ultra Wraith and Ultra Banshee - specialised silver-coloured permutations on the Karo'wark-pattern Ghost, Kemu-pattern Wraith and D'nomlhe-pattern Banshee, respectively.

The Ultras are an enemy rank first introduced in Halo 2, with Ultra Elites and Grunts ranking above Majors but below Zealots. The ultras were later expanded upon in Halo 3, Halo 3: ODST and Halo: Reach, being applied to the Brutes and Drones, before being largely retired in successive games. They were later brought back in Halo Infinite for the Elites and Grunts, with the Skimmers additionally being added to the ultra roster. To view full gameplay-related information for the various classes of Ultra enemy, please see the following articles;