This article is about the military rank used by the Covenant. For the officer rank in the United Nations Space Command, see Captain (NAVCOM). 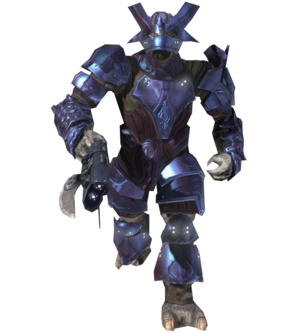 A standard Jiralhanae Captain with a leader power armor.

Captain is a command military rank for warriors serving in the armed forces of the Covenant empire and its remnants. Although it was held by other species such as Yanme'e and Mgalekgolo, the role has been most-widely adopted and known as a Jiralhanae title.

Covenant Captains are seasoned veteran warriors, and are more heavily armed and armored than standard infantry.[1] Captains are commands groups of infantry. They will hold their ground more often, making them far more effective killing machines. Their combat effectiveness is due to their superior experience in the field and the heavy weapons they carry.[citation needed]

Captain-class warriors, at least for the Jiralhanae and Yanme'e, have their own internal ranking structure, with status denoted by the colour of a given individual's battle harness.

Several Sangheili held Platoon Captain and Wraith Captain roles within the Spartan-IVs' Warzone simulations after the Human-Covenant War, to which they are seemingly sub-ranks related to the Captain role.[2] The Wraith Captain is most likely the title below Tankmaster and above the Wraith Officer. In the Warzone simulation, Re'gish Wamik held the Captain role and piloted a D'nomlhe-pattern Banshee, despite his higher Field Master title during the Human-Covenant War.[2]

Jiralhanae Captains are seasoned veteran Jiralhanae, and are more heavily armed and armored than standard Jiralhanae infantry.[1] They are smarter and significantly tougher than their lesser brethren.[citation needed] Jiralhanae captains in the Banished operate with a higher level of autonomy than their Covenant counterparts. They often lead large numbers of troops and perform specific missions that smaller warrior-led groups would not be entrusted with. Like in a typical Jiralhanae clan, Banished Jiralhanae captains serve directly under a chieftain. Many ambitious captains keep their eyes on the chieftain's position and are always looking for opportunities to overthrow their leaders. The very best Jiralhanae captains in the Banished are elevated to the position of Warlord. Chosen captains will typically command the Elite of a given clan or Legion.[3]

Like most Jiralhanae armors prior to the Great Schism, Captains wore standard partial body armor rather than a full-body armor, although based on different skeins; Rh'tol Captains were identified by a small holographic red flag attached to their harnesses extending from their back, while Vheiloth Captains wore rather a gold helmet and more resilent armor than their Rh'tol counterparts.[4][5] During the Schism after the Jiralhanae were given elevated status in the Covenant military, they were issued with iridescent leader power armor, equipped with energy shields.[6] Jiralhanae Captains serving within the Banished are equipped with a red energy field, along with a helmet and full body armor with a jump pack that helps them manoeuvre around the battlefield[7] or perform melee attacks, and they are armed with Ravagers(those donning helmets reminiscent to that of brute captains serving the Covenant) or Hydras(those donning fanned out helmets with bladed face linesand equipped with energy shielding)

The standard and iconic armament of the Jiralhanae Captain is the Type-25 Brute Shot and it is almost exclusively wielded by Captains. Captains are considered to experts at wielding the Brute shot.[1] Some were seen to handle different weapons, such as gravity hammers.[8]

"Brute military doctrine states that to lead, one must be seen."
— Jiralhanae Captain's mantra[9]

The regular Jiralhanae Captain is a low-tier command rank and the lowest of the three known Jiralhanae captain ranks. It is subordinate to higher-ranking Captain Majors and Chieftains. During the Schism, they were issued with iridescent purple-red power armor, equipped with energy shields.[6]

Captain Ultras wear cyan leader power armor, which signifies higher rank than the gold Captain Majors.[11] The armor offers very high resistance from most weapons to protect its user.[1] Captain Ultras are armed with a wide assortment of weapons.[6]

Yanme'e Captains[12] are one of the highest castes of the Yanme'e infantry. They can be denoted by their red-coloured carapace and - unusual for Yanme'e - energy shielding.[12]

Among the typical Covenant rank scheme, Yanme'e Hivewards hold the rank of Captain Major,[13] and are the highest rated Yanme'e protector caste and have one of the highest Yanme'e military ranks in the Covenant military.[14]

"The Captains themselves exhibit individual peculiarities and attitudes, though none could be said to be personable."
— Jeff Easterling on Mgalekgolo Captains.[15]

Within the Banished, Mgalekgolo Captains are "officers" deployed by "Colony" to locations which require more direct involvement and supervision. Captains make sure Lekgolo colonies and gestalts operate at full efficiency during battles. Each Captain is linked directly to "Colony" and its distant bond-brother over a specially modified battlenet relay, often going into battle without its bond-brother.[15] Unlike other Mgalekgolo, Captains are equipped with energy shielding, making them perhaps the strongest known Mgalekgolo warriors.[16]

Keepers of the One Freedom[edit]

A red-colored Jiralhanae Captain as it appears in the early development of Halo 3.

In the early development of Halo 3, crimson-colored Jiralhanae Captains were originally going to be used for this position, but were scrapped and replaced with violet coloring during production of Halo 3 and later in the final game for unknown reasons. A render of a red-colored Brute leader can be found in the Halo 3 Instruction Manual and the Bestiarum, and the design used in the form of Lepidus in Halo: Uprising. Tartarus also wore this armor before becoming Chieftain following the First Battle of Harvest.