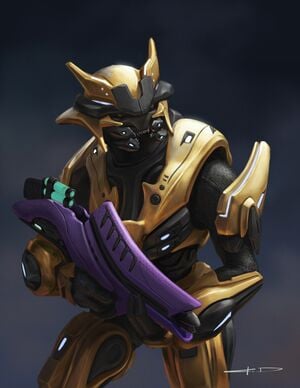 Fleetmaster,[2] occasionally rendered as Fleet Master,[1] is one of the highest titles given to individuals in command of fleets within the Covenant military.[1] On the eve of the Great Schism, the High Prophet of Truth granted the title to several Jiralhanae.[3]

Wearing golden combat harnesses to signify their command position,[6] fleetmasters normally utilize a large warship as their flagship, such as a CAS-class assault carrier or Varric-pattern heavy cruiser.[7] Following the fall of the Covenant, some fleetmasters have found that ancient Rwaru-pattern carrack merchant cruisers are surprisingly capable and resilient troop and materiel transports in modern conflicts.[5] When Voro 'Mantakree was promoted from major to a fleetmaster, Imperial Admiral Xytan 'Jar Wattinree bestowed a middle name upon him, making his name Voro Nar 'Mantakree.[1] However, a middle name is not given to all fleetmasters. Fleetmasters can order tweaks on starships for their fleet during the ship's construction.[8]

Fleetmasters personally appointed by the Hierarchs to lead major expeditions were promoted to the title of Supreme Commander.[9]