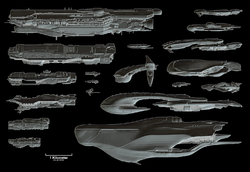 A number of human and Covenant warship classes, in use before, during, and after the Human-Covenant War.

While merchant ships carry cargo, warships are dedicated combat ships, carrying powerful weapons, thick armor and being faster and more maneuverable than a merchant ship. Warships are usually exclusively operated by a Navy, though some organizations and companies have operated their own.

Both the Covenant and the UNSC operate their own fleets of warships. UNSC ships tend to be smaller than their Covenant counterparts, utilizing weaponry significantly less advanced than Covenant technology, though making excellent use of coordination and tactical thinking. Covenant ships are large, and though heavily armed and protected by energy shields, often carry large quantities of ground troops. Larger ships, built for naval engagements as their primary role, are considered capital ships.