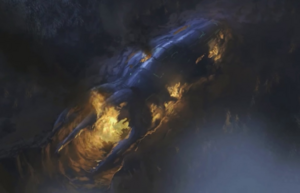 An overhead view of the ship after its crash-landing.

A spacefaring vessel, belonging to an unknown species, crash landed on Halo Installation 04 around 40,000 BCE.[1][2]

Around 60,000 years after the firing of the Halo Array,[2] this vessel crash landed on Installation 04 in Sector 1215. Twenty-six hours later, monitor 343 Guilty Spark arrived at the crash site and noted the crew had not attempted to exit the vessel. He marked seventeen atmosphere leaks along the hull of the ship that had been caused prior to the crash. An analysis showed these gases to be similar to those that comprised Installation 04's atmosphere. Guilty Spark hoped to get answers from these lifeforms, since he had many questions.[1]

Sometime prior to the crash, the ship started broadcasting a distress signal repeated every 72.83 seconds.[2] After attempting to translate it, Guilty Spark blocked the signal, as no communication revealing the location of any of the Halos was allowed. As the ship appeared to be a short-range vessel, Guilty Spark believed there may have been more like it somewhere in the vicinity and so could not take the chance of more lifeforms discovering the ring and possibly breaching Flood containment.[1] In accordance with procedure, 343 Guilty Spark did not attempt to make physical or remote contact with the possible occupants of the ship. Eventually, the atmosphere stopped leaking from the ship and two weeks later, the distress signal terminated. After the distress signal terminated, the monitor had a massive sarcophagus constructed around the remains of the vessel over the course of the next week. Guilty Spark would then lament a missed chance to learn more about the rest of the galaxy and decide to relax his protocols somewhat the next time an alien vessel arrived so as not to miss another such opportunity.[2]