Personal armor,[1] most often simply referred to as armor, was a Forerunner suit of body-assist armor designed to be worn by individuals throughout their lives.[2] Fulfilling a broad variety of roles encompassing from a highly advanced protective suit and neurally-integrated computer system to an article of everyday clothing, personal armor was a central item of Forerunner culture. The armor protected its user both physically and medically, augmented their memory and perception and granted them immediate access to vast amounts of information. With its advanced medical conveniences, it was the primary reason for the Forerunners' virtually indefinite lifespans. In addition, the design and outward appearance of one's armor was a conspicuous indicator of their status in the exceedingly hierarchical Forerunner society. Armor suits specifically designed for combat were known as combat skins.[3]

A suit of personal armor typically had smoothly curved features, with sections of physical armor plating laid over an inner shell of hard light. The luminous hard light shell, visible through gaps between the armor plates, outlined the wearer in a series of trim-lines.[4] Armor could also change its shape to an extent based on the occasion, be it everyday use, combat or defense, or ceremony.[5][6] Component-wise, a typical suit of armor consisted of several ribbon-like sections of torso armor,[7][8] shoulder and arm guards, leg guards and boots.[9] The helmet typically left the wearer's face visible under an adjustable film of energy,[10] while the edges of the helmet itself outlined the facial features.[8] In some cases, the hands were covered by a similar wrap of energy.[10]

Armor also served as an outward reflection of a Forerunner's state of mind. The color of the hard light cocoon changed based on the wearer's mood; for example, a dark shade expressed displeasure.[4] If the armor detected danger, it would automatically take on a defensive mode.[11] If the wearer was excited or upset, the armor's inner glow would intensify and the armor might even visibly ripple and the plating would bulk up,[12][13] as if preparing for an attack. This was especially apparent in Warrior-Servant armor which would become thicker and more robust in preparation for battle.[5] Similarly, deep distress or anguish would cause an armor's outward posture to slouch.[14]

Forerunner armor was colored according to one's rate and position. Typically, their primary coloration varied from white or light gray to black, with the color of the trim-lines ranging from white to various colors.[8] For example, Council advisors wore black armor with green highlights, while the armor worn by Council security was colored black and red.[15] The armor worn by Bornstellar Makes Eternal Lasting as a Manipular was primarily colored silver-gray, with white and green trim-lines.[8] The lavishness and overall decoration of Forerunner armor varied between rates; higher rates, such as Builders, wore more ornate armor than Warrior-Servants, who stood lower in the hierarchy.[16]

Forerunner ships were often equipped with facilities capable of producing suits of armor at will, using small engineering units, some barely visible, to "grow" the armor around the user.[17] The suits were also adaptable, and could be constructed to fit any other species, including the various species of humans. The appearance of the suit's ancilla would also be modeled according to the user's species.[18] Due to its inner layer being composed of hard light, sets of Forerunner armor were very malleable and capable of adapting to different physical builds and attributes. For example, the Ur-Didact was able to use the armor of the female Builder, Maker-of-Moons.[19] "Condensed combat wraps" stored aboard warships could also adapt a normal suit of armor to function as a combat skin.[20]

Forerunners wore personal armor almost invariably on everyday occasions, although conventional garments would be temporarily donned in certain instances, including routine replenishment, repair, cleaning and checks performed on the armor while a Forerunner stayed in the safety of their residence or a ship, for example.[21][22] Armor would also have to be removed for the ritual involved with mutation.[23] When removed, a suit of armor would automatically unwind from the wearer's body and fold itself into a compact bundle for storage.[19] 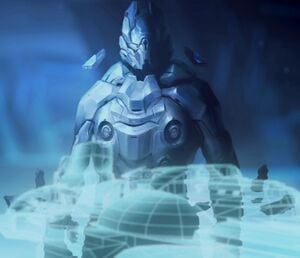 The armor worn by Faber, the Master Builder.

Forerunner armor suits were equipped with ancillas, personal artificial intelligence constructs which interfaced directly with the wearer's mind. The ancilla stored and collated information recorded by the armor and the wearer's own sensory data, which could both be accessed later, significantly enhancing a Forerunner's already accurate memory.[24] In addition to their own stores of knowledge, a personal ancilla could connect to a network, such as that of a starship, and provide information for the wearer at will. However, the information one could access was limited based on their position.[8] Personal armor also allowed mature Forerunners to connect to the Domain.[2] Armor also acted as a sophisticated mind-machine interface; for example, individuals could navigate a starship via their armor, sometimes with more than one Forerunner linked to one another in synchrony.[25]

The armor eliminated a Forerunner's natural need to sleep, artificially managing the functions normally taken care of by sleeping and allowing a constant continuity of consciousness without side effects. This gave Forerunners more time for their daily activities and meditation.[26] Forerunners did still rarely experience diagnostic waking dreams induced by the armor for "housekeeping" purposes.[27] The armor was integrated with the wearer's mind to the point that in cases of psychologically harmful experiences, the armor could selectively purge specific memories. In the event of extreme mental damage, the armor could "reset" the owner's brain to a stable state. However, this process could potentially result in complications.[28]

Forerunners could transfer enormous amounts of information to one another through the armor at the touch of each other's fingertips,[29] and could engage in secure "silent conversation" by linking hands.[30] Forerunners of higher forms, namely Promethean commanders, were capable simultaneously processing the collective sensory experience of thousands of individuals, relayed through their armor.[31] The armor's sensor equipment greatly amplified a Forerunner's senses, and could even substitute natural vision altogether, such as in the case of Bitterness-of-the-Vanquished, who, despite her blindness, received visual sensory input from her armor.[32]

Personal armor granted its wearer immunity to most diseases. In emergency situations, the armor could suspend its user until they were rescued, and even provide nourishment for a time.[2] Most Forerunner armor was capable of keeping the wearer alive for years without outside influences.[7] If operational, the armor would also preserve the wearer's body after death.[33] Impressions of the wearer's consciousness were also stored in the armor in the rare event of death; traditionally, this essence would be placed into a timelocked Durance.[34] Forerunner armor also served as a powered exoskeleton, assisting or enhancing the wearer's movement.[35] Personal armor was sealed against vacuum or the lack of atmosphere.[36] Most if not all Forerunner armor possessed N-barriers and a system involving lenses to protect the user from harm.[37]

In some cases, personal armor could be configured to make its wearer hover some distance over the ground as opposed to walking. Lifeworkers and Warrior-Servants have been observed using this capability.[38] The specific features contained by a Forerunner's armor also varied according to their rate and task; for example, Lifeworker armor contained a wide array of equipment related to medicine and biological research,[4] while armor used by Warrior-Servants was designed with combat and warfare in mind.[5] One notable attribute of Warrior armor was its ability to attune itself to specific forms of attack.[39]

Though the body armor provided the user with certain advantages, it also caused the user to lose sensitivity to the world around them. For example, when Bornstellar Makes Eternal Lasting decided to remove his body armor on Earth, he found himself exceedingly vulnerable; a simple touch from Chakas caused a strong reaction. Since Forerunners also relied on the armor to keep track of minute details in their surroundings, supposedly allowing them to occupy their minds with more sophisticated thoughts, a Forerunner deprived of their armor might find their powers of observation significantly reduced, particularly in an unfamiliar environment.[40]

The Forerunners also developed various countermeasures to be used against personal armor. Small automatons known as armor cracking units were specifically designed to break through armor.[41] Programs known as AI suppressors could deactivate a suit's ancilla, allowing the attacker to take control of the armor itself.[42] Powerful ancillas, such as Mendicant Bias, were capable of overriding personal armor and even using it to crush the wearer.[35][43]

In The Forerunner Saga, Forerunner characters are described as virtually always having their faces visible, as the face portion of the helmet of the armor is merely an invisible energy field.[10] Most released visual media, including Origins and the terminals of Halo 4, depict generic Forerunner armor with a helmet that completely or partially conceals the wearer's face, even on occasions where any extra protection would hardly be appropriate, including the Didact and Faber wearing full helmets in a Council meeting. The Librarian's headdress is a notable exception to this, although it is unclear whether her outfit shown in Halo 4 is meant to be a suit of personal armor or a more conventional dress.