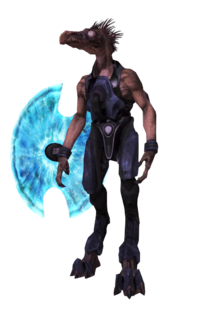 A Kig-Yar Minor in his combat harness.

The combat harness worn by the Kig-Yar is a type of body armor and environmental suit issued to the Kig-Yar that served the Covenant's military. It provides basic protection from hostile fire and the elements.

Compared to the combat harness worn by the Sangheili, the Kig-Yar's combat harness is rather simple. The armor of a Kig-Yar Minor and a Major does not offer protection for the head or upper arms of its wearer.[1][2] While not all, many of its variants feature a point defense gauntlet as a basic equipment.[3] Made of a blue and silver metallic material, the armor protects its user from basic small arms fire. Isolated pieces of the armor protrude from each toe of the Kig-Yar, to protect its foot.[1][2] Generally, the Minor dons a point defense gauntlet on their left arm to shield them from a majority of small arms fire.[3] On their right arm, the Kig-Yar wears a protective piece of armor that shields their arm while they are firing their weapon behind the cover of their shield.[1][2] Some variants of the combat harness give Majors additional protection on the arms in the form of partial pauldrons. Aside from the addition of targeting headgear, Kig-Yar Snipers do not receive any additional armor components.[4]

Kig-Yar mercenaries that serve in Jul 'Mdama's reformed Covenant faction generally receive similar armor to what they wore in the old Covenant. The combat harness of a Kig-Yar Storm is nearly identical to that of a Minor. However, the armor worn by a Kig-Yar Heavy features a helmet that protects its users head. The helmet and targeting gear worn by Snipers covers a larger portion of its users head.[5]