Mombasa[2][3][4] is a major Earth city[5] in the Republic of Kenya; a member state of the East African Protectorate.[6] The heart of the city was the prosperous New Mombasa on Mombasa Island. The nearby mainland was the site of Old Mombasa, a comparatively run-down district.[7] Mombasa was considered a megacity.[8]

Mombasa is considered one of the most renowned and majestic cities on the planet and the "heart and soul" of the East African Protectorate.[9] The city's sea wall was famous.[10]

Mombasa was the site of Earth's first Space elevator[7] and centuries later, was a battlefield in the climactic year of the Human-Covenant War.[11][12] Most, if not the entire city was destroyed in this battle[13][14][15] requiring reconstruction through Project Rebirth.[16][3]

Mombasa Island, where the metropolis of New Mombasa lies, is separated from the mainland by two creeks: Tudor Creek to the north and Kilindini Harbor to the south. Northwest of the island and between the inlets, there may be a large peninsula, connected to the Mombasa island by the Makupa Causeway.[Note 1] Outside of the city and outside of Voi were the New Mombasa badlands.[17]

The skyline of Old Mombasa.[18]

The moniker of Old Mombasa was applied to all municipalities in a 74 km radius of Mombasa.[7]

New Mombasa encompasses the entirety of Mombasa Island,[7] as well as some mainland territories.[6]

The City Center spans much of the Southeast portion of the island, being divided in multiple walled sectors.[Note 2]

While the majority of New Mombasa has been divided to numbered sectors, some districts such as Mbaraki, Kizingo or Kikowani still retain their original names. The original names are often seen in the names of streets or train stations, for example. Some of the districts' names have changed, albeit slightly; areas originally referred to as Tangana and Liwatoni are now referred to as Tanaga and Liwitoni, respectively. The locations of some districts have changed as well. This is the case with most of the districts on the southern side of the island, where the sea has claimed large areas of land.[15]

On the outskirts of New Mombasa existed an industrial wasteland where a UNSC munitions testing complex sat.[20]

Mombasa underwent dramatic change with the arrival of the interstellar era. In response to increasing demand for cheap orbital access, due to its economic stability and prominent location, Mombasa was chosen to be Earth's first Space Elevator city.[21] The government began construction on one of the wonders of the age: a space elevator (Mombasa's proximity to the equator made it an ideal location) in 2302.[7] This structure served to lift heavy cargo into geosynchronous orbit without expensive booster rockets filled with fuel.

Over the next eleven years the city experienced explosive growth, but nothing compared to what followed. The city grew out as well as up, its urban sprawl unequaled throughout the continent.[7]

Mombasa would change dramatically within the centuries that followed. By 2430, New Mombasa had absorbed the entire island and many of the surrounding towns, which became overrun by residents of Mombasa. The switch of name was never official, and though many of the neighborhoods within direct line of sight to the Mombasa Tether still distributed newspapers and Chatter directories under their previous names, all municipalities within a 74 km radius of the island became referred to as "Old Mombasa."[7]

On December 19, 2512, the Superintendent was activated to manage the city's infrastructure.[22] 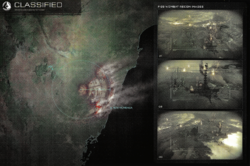 Some of the effects the Covenant had on the Mombasa area.

On October 20, 2552, a small group of Covenant capital ships arrived at Earth. Uninformed of the Human presence on Earth, Regret was outnumbered and outgunned against the UNSC Home Fleet. During the orbital battle, the Prophet of Regret's flagship broke through Earth's defenses and descended to the atmosphere, and anchored itself above New Mombasa.[11] The Covenant started deploying their ground forces to the city, in search of a Forerunner relic, the Ark Portal, buried under the city.[23]

However, due to a strong UNSC counterattack and the inferior numbers of the Covenant, Regret ordered all of his forces to be evacuated back aboard the Carrier. After this, the ship jumped into slipspace just above the city, releasing a shock wave and pulling multiple city blocks from the mainland with it.[12] This event became known as the "New Mombasa Slipspace Event."[24] After sending in ground forces and crushing the remaining UNSC resistance in the city in hours after Regret's retreat, the remaining ships of the initial fleet along with a larger Covenant fleet glassed the area in order to uncover the Portal the next day.[25][15] In the final days of the Battle in Africa, only smoldering ruins of Mombasa remained.[14] Though some areas like Halleg Street did survive somewhat intact.[3]

Following the end of the war, the East African Protectorate began planning an ambitious and expensive project to rebuild the destroyed urban core.[3]

Around the same time, the Unified Earth Government began Project Rebirth to rehabilitate war torn areas on Earth.[26] UEG investments through Rebirth and UNSC activity at the nearby Portal at Voi did revitalize some of the city.[3] Eventually as well through Rebirth, the old city hall thoroughfare for Mombasa was to be transformed into the UNSC Memorial Park.[16] Part of the Rebirth investment was in reality to act as a smokescreen to allow for exploration of branching Forerunner mechanisms under the city as well as other work at the Excession.[27]

By 2560, much of the city was in a habitable state, and the Mombasa Tether was under reconstruction.[4]

The Superintendent's most seen avatar.

New Mombasa had a mayor.[16] The Superintendent, a second generation "dumb-AI,"[22] managed many of the municipal functions in New Mombasa[28] and in Old Mombasa.[18]

The transit of Mombasa is run by the New Mombasa Transit Authority. They are known to operate the extensive Maglev train network within the city.[28][31]

The New Mombasa Police Department is the police force of the city. They have stations in Old Mombasa[18] and their headquarters is located in the New Mombasa city center.[32] The UNSC's Joint Task Force MARIAH which guards the Excession, also guarded the Forerunner elements under Mombasa.[27]

The waste management of the city is handled by the New Mombasa Waste Management. They operate all sorts of garbage cans throughout New Mombasa and Old Mombasa. They also operate the Olifant.[15] The SinoViet Heavy Machinery owned Mombasa Sewer..Ltd appears to be involved in some form with the sewer system of the city.[33] Storm drains from the city ran out to the Mombasa Quays.[10]

Some parks and greenspace in Mombasa is manged by the New Mombasa Parks and Recreation. The Uplift Nature Reserve being one of the parks under their authority.[15]

The small industrial town of Voi helped to provide water, power, and transportation for Mombasa.[8] Some elements of power in Mombasa itself are managed and/or generated by the New Mombasa Energy Company.[4] 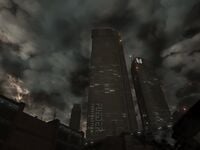 Fueder Construction and Misriah Armory offices in the city center.[28]

The economy of Mombasa is vast, with numerous corporations from various industries residing in or otherwise operating in the city. The size and scale of each company being quite different.

On the smaller end, there are hotels such as Hotel Zanzibar,[11] Palace Hotel[10] and one unidentified hotel[34] which all dotted the city. The smaller Voi Theater[35] and Arcade Game Zone[4] provided entertainment. Arney Antics was a smaller gun shop in the city. Various food options in the form of bars, restaurants, and other stores such as The Roost Star, Kuku's Cafe, Biashara Foods,[33] Kenya Vibe,[4] and The Corner[33][4] existed as well.

Vyrant Telecom owned the tallest office tower in the city, while Atlas Communications Corporation owned offices in the city and provided services as well.[32]

At least two financial services are known to operate in Mombasa. The first being African Trust.[28][36] The second, is the United Bank of Mombasa which operated ATMs in a part of the city.[4]

Some of Mombasa's newspapers.[18]

Multiple media organizations exist within Mombasa. The city has two newspapers, the Daily Bulletin and The Mombasa Times. Mombasa also had its own circus called the Mombasa Circus. As well, rock concerts were held in the city by bands such as Fluke of the Narwal.[18]

The architecture of the city is different depending on the location. Old Mombasa's architecture was an odd hodgepodge of old and new: 16th-century Muslim arcades, aging 21st-century office buildings, looming 26th-century power couplings, old concrete homes secured with computerized locks. Clotheslines strung next to power lines, and mechanical gates set into ancient brick walls.[11][18] In some areas, newer skyscrapers had found their home.[15][34]

The variety of architecture in Mombasa.[18]

New Mombasa is composed differently. In the southeastern city centre there is more use of a dense commercial focused arcology,[28] while elsewhere, it is more focused on large industrial designs.[12]

The culture also seems displaced between the different parts of the city; while New Mombasa was populated with industrial workers and ambitious cosmopolitans, Old Mombasa was considered to be more of an old rundown slum that deteriorates by the day. The denizens of the old city were largely isolated from the residents of New Mombasa; even their dialect was completely different from the standard language.[23]

With the rebuilding of the city, a new divide among the people has formed; between the original citizens, and the researchers and workers from colonial diaspora brought to the city.[27]

Artwork of Mombasa for Halo 2: Anniversary.

Mombasa is one of the locations visited in Halo 2's campaign. It is featured in two campaign levels; Outskirts which takes place in Old Mombasa and Metropolis which mostly takes place in the industrial zone of New Mombasa. Several multiplayer maps take place in the Mombasa area as well. Terminal, Ivory Tower, Tombstone, District, and Turf are all in various locations and various points in the city's history.

Mombasa is not a playable space in Halo 3's campaign. However its ruins can be seen in Tsavo Highway and The Storm across the other side of The Portal. The Mombasa area, specifically the Mombasa Quays, is playable in the map Longshore from the Mythic II Map Pack. 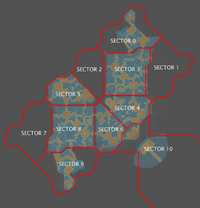 The playable area of Mombasa in Mombasa Streets.

Save for the very final cutscene, every level of Halo 3: ODST's campaign and every map in Firefight take place in Mombasa. Most prominently, the levels and maps are set in the New Mombasa city center. Mombasa Streets allow players to explore several sectors of the city center. The placement of some landmarks, like the Orbital elevator is different than what is seen in Halo 2.

A mainland portion of Mombasa is playable in the map Breakneck as part of the Anniversary Map Pack. Numerous landmarks can be seen outside the boundaries of the playable space. This version appears to be very similar to ODST's design of the city, though some elements of the city geography do not line up with any known depiction of Mombasa.

The Haller Street area of the city is playable in the multiplayer maps Bazaar and Streets.

The Mombasa area was first seen during the Halo 2 E3 demo where it was significantly different than designs of the city seen in released media. In the demo, the city was a large tree like structure stretching into the sky. This structure was removed for the final game where the designers wanted the city to feel more real. They then based it more on the actual city using photographs to help imagine what it would look like 500 years into the future.[37]

During the production of Halo 4, concept art by Michael Pedro was produced for a potential multiplayer map set in "Mombasa Heights".[38]