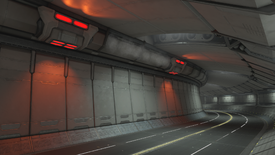 A tunnel of the New Mombasa 105 East.

New Mombasa 105 East (NM 105 E) was a large highway that passed through the city of Mombasa, Kenya on Earth. It passed through Old Mombasa and ended in New Mombasa's city center. The highway was a significant conduit of civilian traffic.[1]

During the Battle of Mombasa in 2552, the highway was heavily damaged during intense fighting between UNSC Marines and Covenant forces. Sections of the tunnels collapsed due to Covenant bombardment, and the Highway's emergency doors were activated. The Covenant positioned over a dozen Ghost assault vehicles, four Banshees, and three Wraiths, several Shielded Plasma Cannons, along with a large number of infantry, including Elites, Drones, Jackals, and Grunts, to hold the NM 105 E.[2]

John-117 along with a number of UNSC Marines led an assault on positions on the highway in the hopes of getting to Mombasa Island. They as well disrupted several Covenant convoys that were within the highway tunnels.[2] John and more Marines crossed the highway's large bridge and reached the island. They were soon forced to exit the highway into a service tunnel that led to the Kilindini Park Cultural Center.[1]

The NM 105 E ran through a tunnel in Old Mombasa's Liberty Street before connecting to New Mombasa via a large suspension bridge. Traveling farther down the highway would take one straight through Sector B and the industrial area to the city center.[1]

The highway bridge running between Old and New Mombasa.

The concept of a cable-stayed bridge had already existed for some time, but the Kilindini bridge used the concept in a unique new way. The design combined several structural concepts to produce a maximally ascetic appeal. It employed an extradosed design with double backward-cantilever rounded-portal spars, connected to the deck with 44 cables in the harp configuration. It was one of few bridges connecting New Mombasa to the mainland via Old Mombasa. Toll booths were stationed at each end of the structure.[1]

The highway was completely enclosed within an overland tunnel, allowing for the construction of numerous buildings on top. This gave the illusion from most perspectives that the highway was subterranean in spite of a large portion being above ground.[2] The tunnel bore a four-lane highway constructed of prefabricated sections that consist of a polymer and concrete mixture.[1]

Mtangwe Underpass on the New Mombasa side passed under the Kilindini district, connecting to other streets such as Moi Avenue and Shimanzi Road in the city's industrial area.[3]

The underground highway was separated into several sections, including Sections C2, C3, and C4.[1]

The New Mombasa 105 East featured several heavy interchange gates that could be closed off in the case of emergency. The bridge deck has a similar structure to the enclosed sections of the higwhay but with slight additions such as built-in roadblocks.[1]

On both ends of the highway bridge, "SV.2326" can be seen painted on the walls. This is likely referring to the year of construction of the NM 105 E.[1]