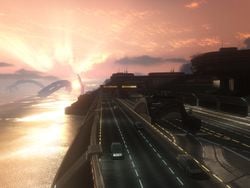 A section of the Waterfront Highway facing the Indian Ocean.

The New Mombasa Waterfront Highway, also referred to as Coastal Highway, is a highway that runs along the seawall that follows the coastline of the Mombasa Island and surrounds the metropolis of New Mombasa.[1]

Likely on the first day of the Battle of Mombasa, the New Mombasa Transit Authority locked emergency doors 84-99 due to the attack by the Fleet of Sacred Consecration.[1]

During the second day of the battle on October 21, 2552, three ODSTs (The Rookie, Edward Buck and Veronica Dare) fought their way along the highway to safely escape the city with a critical asset, a defected Huragok holding important data from Vergil, a subroutine of the city's Superintendent artificial intelligence. After pushing through heavy Covenant resistance on the highway and fending off waves of Covenant at the main entrance to the Uplift Nature Reserve, they were eventually extracted by a Covenant Phantom dropship stolen by the squad. The highway, along with the entire city, was destroyed when the Covenant glassed the area in order to uncover the Forerunner structure beneath it.[1]

The highway snakes around the southeastern tip of Mombasa Island, along the northern coast, before turning south briefly along the eastern coast and then turning again along the southern coast. At the eastern most point of the highway, it curves around ONI Alpha Site. However, connections to Alpha Site and the highway are known to exist. Several exits exist on either coast as well. One exit on the south coast is to the Uplift Nature Reserve.[1]