"KEEP IT CLEAN!"
— The Superintendent's most notable saying

This Superintendent (AI Serial Number: NM/EAP/98458930-1244)[1] is a second generation "dumb" Superintendent-class artificial intelligence in charge of making sure the infrastructure of the city of New Mombasa ran smoothly.[2] It was one of six similar Superintendent AIs on Earth.[1]

It was also apparently used by the NMPD to observe people and record their conversations through its cameras and other equipment. The Superintendent's data center was located deep below the city, with its main core residing under a shaft connected to ONI Alpha Site on the surface.

The Superintendent had a subroutine called Vergil, originally created by Doctor Daniel Endesha to look after his daughter, Sadie Endesha. 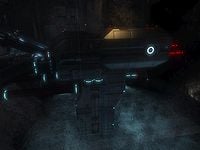 The Superintendent's core under New Mombasa.

Soon after the Covenant invasion, a defected Huragok known as Quick to Adjust made its way into the Superintendent's data center. Driven by its innate fascination with all machines, it started to repair the Superintendent's data core, which had been damaged in the attack. Soon, a report of data corruption was received by a communications officer aboard the prowler UNSC Tokyo Rules. The officer contacted the AI, asking it to put Kinsler on the line, but it did not comply. The Superintendent was then asked to upload its logs for the last twenty-four hours, for which the AI only replied with repeating the phrase "KEEP IT CLEAN". The COMM officer then told the AI they would send a team to retrieve the construct's data, and ordered the Superintendent to redirect all comm traffic through her. The Superintendent only replied with its pre-recorded phrases.[3]

Some time later, when the Solemn Penance initiated a slipspace transition over the city, the resulting shockwave severely damaged, as well partially disabled the Superintendent.[4] This is when Captain Dare was dispatched on a secret mission with a team of ODSTs, which involved the retrieval of the Superintendent - though her squad was unaware of this objective. With the troopers scattered about the city by the Slipspace shockwave, Dare was separated from the ODSTs and holed up in a nearby building where she attempted to find a way of getting the AI to safety by herself.

During the day, the Superintendent's Vergil subroutine routinely helped Sadie Endesha get out of dangerous situations, including ambushes by corrupt police Commissioner Kinsler. Frustrated, Kinsler had the whole AI shut down despite the fact that without the Superintendent, the city's evacuation would grind to a halt. The duty officer at NMPD headquarters refused to reactivate the AI, even when ordered to do so by Dare. Sadie and Mike Branley managed to "force" the duty officer to turn the Superintendent back on however.[5]

The Superintendent shutting down.

Later that day, the Superintendent aided both UNSC Marine and NMPD forces remaining in the city in fighting off the recently arrived Covenant occupation force. In the following night, the construct aided the ODST known as "the Rookie" in evading Covenant foot patrols in the rubble of the city by giving him access to a map of the city, as well as activating lights and signs; leading him to safety.[6]

The Superintendent serves as a guide to the Rookie during the campaign, in a similar manner to the way Cortana guided the Master Chief. However, the Superintendent is rather limited in terms of communication, only able to interact with the Rookie by manipulating municipal electronic signs (for example, lighting up a sign to read 'keep right' to guide the Rookie in that direction) and speaking through a number of pre-recorded phrases. For example, instead of directly asking the squad not to destroy an expensive bridge, he can only use the generic phrase 'respect public property.' The Superintendent may also not be fully operational due to the slipspace rupture, as stated by Buck in the Desperate Measures ViDoc. More likely, it is a result of being a very low-grade "dumb" AI, whose capabilities pale in comparison to their more advanced "smart" counterparts.

The Superintendent can also help the Rookie find audio logs: it raises and lowers traffic blocks, flashes police sirens, rings telephones, manipulates electronic signs, and spits coins out of an ATM. It also makes the player's VISR produce 'beep'-like sounds when they are close to an audio log. The closer the player gets, it beeps faster, longer or more frequent. The Superintendent also helps the Rookie by granting him access to a map of the city, and highlighting areas of interest, mostly pieces of equipment ("beacons") left by his squad mates. When inspected, these "beacons" will trigger flashback missions, representing the Rookie watching recorded footage, which reveal what happened to the other squad members, one at a time. On this map, red dots represent nearby enemy targets. In gameplay, activating the map and the audio logs does not pause the action around the Rookie and he can still be attacked and killed.

Perhaps as a result of Kinsler's pursuit of Sadie Endesha, the Superintendent is noticeably reluctant to cooperate with local police department personnel, sometimes at the expense of military effectiveness. During the ONI Alpha Site level, an officer tries to get the AI to grant him access so that he can detonate the demolition charges planted by Dutch and Mickey to deny the Covenant easy access to the Alpha Site, only granting Dutch access when he approached the keypad. Another officer, trapped in the tunnels of the Superintendent's data core, was repeatedly denied access until the Rookie approached and was granted access. In the latter case, the Superintendent had a legitimate reason to be suspicious - the officer was checking that Dr Endesha was dead, and attacked the Rookie to prevent any witnesses to Endesha's murder.[6]