The New Mombasa Police Department (or NMPD) was the primary law enforcement agency of New Mombasa, Kenya.[2] The NMPD was also charged with operating in Old Mombasa, in addition to their normal routines in the industrialized metropolis of New Mombasa.[3] The NMPD Headquarters was located at the Tanaga district of New Mombasa.

When New Mombasa was attacked by the Covenant during the Battle for Earth, they assisted the UNSC in fending off the invasion force. At the time of the Covenant invasion they were under the command of Commissioner Kinsler, a highly corrupt official who used them as his private army. While some officers were loyal to Kinsler, there were also many officers who resented him.[4]

The New Mombasa Police Department overlooking the city during the invasion.

During the Covenant invasion of Mombasa, the NMPD controlled the evacuation of the city along with several UNSC Marine and Army units.[5] During the evacuation, propaganda was constantly being announced to the citizens, while the department's communications duty officer was in contact with the UNSC Navy and ONI.[4] While operational during the first hours of the battle, the NMPD Headquarters was lost to the Covenant later in the day.[2]

During the battle, Commissioner Kinsler was entirely unconcerned of the civilian populace, only caring about his personal safety. Later, Kinsler remote-activated the Superintendent's data center's fire containment systems which flooded sublevel 9 with argon, killing Dr. Endesha. He also had the AI deactivated, and sent a team of officers into the data center to retrieve the data the Superintendent had collected. Due to the efforts of Mike Branley and Sadie Endesha, the Superintendent was restarted. After boarding his private train and ordering his loyal officers to fire upon the crowd, Kinsler was killed when the Superintendent opened the doors, allowing the angry mob to tear him apart.[4]

Later in the day, all of the remaining NMPD forces were called to the Marines' rally point at the entrance to the ONI Alpha Site. They defended the facility with the UNSC Marines, only to be forced to fall back and eventually destroy the building in order to prevent ONI's data from falling into enemy hands. They managed to escape by having one of their Pelicans pick them and two ODSTs up, but it later crashed near the NMPD headquaters after being shot down by two Covenant Banshees. Later, the team in the data center failed in their mission, as all of them were killed by Covenant present within the facility, except for one officer who was eventually killed when he attacked an ODST after finding Endesha's body.[2] 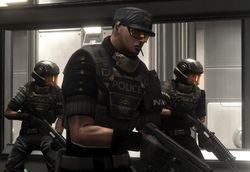 The standard kit for the NMPD officer was an all black uniform, consisting of a utility uniform, body armor, and a modified CH252 helmet with a blast-visor. NMPD pilots wore a specialised pilot helmet and body armour similar to that of their UNSC counterparts, that could be worn in brown or white.[6][7] Their armament included weapons such as the MA5C and MA37 assault rifles,[8] M90A shotgun, M6C/SOCOM and M6D magnum pistols, M7S/Caseless Submachine Gun, and the BR55 Heavy Barrel Service Rifle. NMPD also had SWAT teams, who often utilized flashbang grenades.[4] The NMPD also employed the M319 grenade launcher[9] and SRS99D-S2 AM sniper rifle.[7][8] For riot situations, NMPD officers also had access to riot shields.[8]

In addition to the hundreds of modified HuCiv Genet police vehicles patrolling the streets, the New Mombasa Police Department also maintained a fleet of D77C-NMPD Pelican dropships in Police livery. Notable additions included a high speed camera on the bow of the dropship, and a rescue cable at the rear of the troop bay. These dropships could be armed with the AIE-486H Heavy Machine Gun in the troop bay.[2] The NMPD also employs a riot-variant of the Cyclops mech known as the "Sector 12 Cyclops", armed with a heavy machine gun and a riot shield.[10] The NMPD also maintains its own variants of the AV-14 Hornet and M831 Troop Transport Warthog.[7][9]