"I believe that the sound of racking the pump of a shotgun is universally recognized as "kiss your ass goodbye"."
— Anonymous E2-BAG/1/7 serviceman[1]

The M90A Close Assault Weapon System, or M90A CAWS,[3][2] is a powerful pump-action shotgun in the service of the United Nations Space Command and law enforcement authorities as a standard close-quarters assault weapon.[4] The M90A is prioritised for urban tactical warfare, and is the preferred close-quarters weapon for use by civil defence authorities.[2] It is a variant of the widespread DTM series produced by Weapon System Technologies.[1]

The M90A fires the tremendously powerful 8-gauge magnum cartridge, generally the 0000-variant, feeding from a 6-shell dual-tubular non-detachable. The weapon has an overall length of 123.9 cm and a barrel length of 61 cm.[Note 1] It weighs 5.4 kg empty and 5.7 when fully loaded.[1] It has a characteristic shape, with the prominent non-detachable magazine positioned above the barrel, atop which are positioned a set of blue-glowing illuminated iron sights. Below the barrel, the forend (or "pump") follows a protruding rod. Into the forend is inserted a reddish button. On the weapon's left side, mounted along the barrel, is a flashlight. The adjustable stock, pistol grip and forend of the weapon have a matte black finish, with the rest of the weapon being a dark, metallic gray. The receiver port of the weapon is located on top of its body, roughly in-line with the trigger on the underside. It features a chrome finish, distinguishing it from the rest of the weapon's body.[5][6] 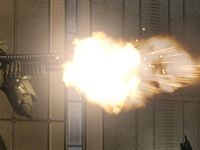 When using standard 0000 8-Gauge Magnum ammunition, the weapon does not fire a single projectile but a spray of small pellets known as "buckshot", each of which leaves the weapon's barrel travelling at 300–400 m/s in a plume of fiery gasses.[1] After the weapon is discharged via the depression of a trigger positioned at the top of the pistol grip, the forend of the weapon (which acts as a foregrip for the user's non-dominant hand) must be retracted towards the stock by the user, ejecting the spent shell of the round just fired. When the forend is fully retracted, the way will have been cleared for an elevator to position a new shell from the magazine so that it can be loaded as the forend is once again pushed forward in the direction of the muzzle.[5][6]

At any point, the weapon's non-detachable magazine can be topped off or reloaded with more individual shells via the receiver. Once the magazine has been topped off, the weapon's action is cycled before firing can recommence.[5][6]

The M90A is a simple weapon, quite easy for any shooter to make use of. When firing standard ammunition, it possesses an effective range of 40 metres (130 ft), an extreme degree of stopping power at close range, and a situationally beneficial lack of propensity to cause unintended damage to hard targets such as spacecraft hulls. It features noticeably milder recoil than other variants of the DTM series. A marine of E2-BAG/1/7 noted that the M90A's usefulness outside its specific role was somewhat limited, musing that it would perhaps be better thought of as a tool than a weapon.[1]

The M90A was prominently employed by during the Battle of Earth, including the Battle of Mombasa,[6] the Attack on Crow's Nest, and the Battle of Voi, by UNSC marines,[5] NMPD officers,[6] and in at least one case, civilian combatants.[7] It was also used during the Battle of The Ark.[5] After the war, the M90A was one of many weapons featured in the report Machines, Materiel and Munitions from the Human-Covenant Conflict, 2525 - Present by Dr. Robert McLees,[1], and an M90A was displayed in the Museum of Humanity.[8]