The M6D Personal Defense Weapon System,[5] commonly referred to as the M6D Pistol[3] or M6D,[6] is a United Nations Space Command firearm and one of the variants of Misriah Armory's M6 handgun series.[7] 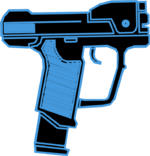 The M6D is a recoil-operated, magazine-fed handgun,[3] chambered in 12.7x40mm ammunition, typically employed with semi-armor-piercing, high-explosive (SAPHE) rounds of that chambering, and feeding from 12-round detachable box magazines.[8][7] It has also been known to be chambered in the .450 Magnum load.[9] The weapon is somewhat unusual for a handgun in that it is capable of both semi-automatic and automatic firing.[4][3] The M6D is one of the M6 series' upscaled variants,[7] being larger than non-upscaled M6s by roughly 117%.[10] The M6D is also an officer's model, and in this capacity was employed by Captain Jacob Keyes on the UNSC Pillar of Autumn.[11][7] Like other officer's model M6s, the weapon is fitted with smart-linked KFA-2 optic for utilization by those employing a heads-up display.[7][12]

M6Ds are produced with a distinctive hard chrome finish.[7] The M6D is relatively distinctive among the M6 family, most notable for the brown hue of the grip, which features small bumps across its surface. The length of the magazine, which integrates a prominent grip extension, makes the weapon appear comparatively very large. Various kanji characters can be observed in different locations on its body.[8][2]

An empty M6D with its slide locked back.

As with most human weapons, the M6D is discharged when a trigger positioned at the top of the grip is depressed by the index finger. The energy of the expanding propellant gasses from the cartridge causes the slide to reciprocate into the open position, expelling the spent casing of the round just fired. The weapon's recoil mechanism then moves the slide back into place, stripping a fresh round from the magazine and chambering it to make the weapon ready to fire once again. This process occurs with almost imperceptible speed and can be repeated with successive trigger-pulls until the weapon is emptied,[2] at which point the slide will lock back,[13] awaiting the insertion of another magazine. When a fresh magazine is inserted, the slide will then travel forward, stripping the first round from the magazine and chambering it. If the weapon is reloaded before it is completely empty, this process will not occur as the cycle of the slide is uninterrupted. When the weapon is employed in its fully-automatic fire-mode, the trigger does not need to be repeatedly pulled for continuous firing.[2] To prevent accidental firing, the weapon has a safety mechanism which is manually engaged when the firearm is not in active use.[14]

To utilize the weapon's KFA-2 optic, the user must be equipped with headwear or eyewear capable of displaying a HUD.[12] When activated, the weapon projects the view from the scope at x2 magnification on the user's visor with a circular targeting reticle.[2][8] 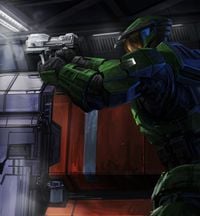 John-117 making use of Jacob Keyes' M6D on the Pillar of Autumn.

The performance of the M6D has been repeatedly indicated to rely heavily on proficiency of its user. John-117 believed that, in the hands of someone who knew how to operate it, the M6D possessed a great deal of stopping power and was one of the UNSC's most effective infantry weapons, being almost as effective as an assault rifle when firing SAPHE ammunition.[1] Likewise, a proficient shooter can also use the M6D to engage targets from a surprising distance when making use of the mounted KFA-2 optic. Its aptitude in this application is so great that, circumstantially, it is preferable to pick off lightly-protected semi-distant enemy targets with this weapon than an assault rifle.[6]

As with many non-specialized human firearms, this weapon can be somewhat inefficient against targets equipped with personal energy shielding, requiring in one instance the expenditure of a full magazine to incapacitate an elite minor.[14] However, headshots with the weapon can be very effective,[6] making careful shot placement of high importance when engaging Covenant forces.[3] They are, of course, not very effective at engaging Covenant vehicles, with rounds fired from the weapon simply ricocheting off the exterior of targets such as the Umbra light transport.[15]

The M6D saw a significant amount of service throughout the Covenant War. It was used by SPARTAN-II operatives throughout Operation: SILENT STORM and the subsequent mission to Netherop in 2526.[1][15] Spartans continued to use the weapon, this time chambered in .450 Magnum ammo, during the Battle of Sigma Octanus IV.[9] Most notable, however, is its usage during the Battle of Installation 04. Throughout the engagement, it was employed heavily by UNSC marines and Navy personnel.[8] Captain Jacob Keyes notably offered his M6D to John-117 to use to evacuate Cortana from the UNSC Pillar of Autumn, which he then went on to utilize on the surface of the ring.[14]

An M6D as it appears in Halo: Combat Evolved Anniversary.

In Halo: Combat Evolved Anniversary, the M6D is represented by a repurposed Halo 3 M6G magnum model, with markings on the weapon changed to reflect that it is an M6D. It features a black, smooth grip, a shorter magazine, and is polished to a higher sheen than the more prominent depiction from Halo: Combat Evolved and Halo 5: Guardians. In all respects save for the "M6D" marking on the slide, it resembles the M6G.[16]