(Redirected from Hunter)
This article is about the species. For the armor, see HUNTER-class Mjolnir.

"They're all scary and angry and they like to smash things."
— Bungie[3]

The Mgalekgolo[4] (Ophis congregatio, meaning "serpent union"),[5] is a gestalt of Lekgolo, which are small worm-like creatures that group together to exponentially increase their intelligence, strength, and maneuverability. Of the myriad Lekgolo collectives, the best known is the Mgalekgolo or Hunter, a bipedal form that is used for heavy assault. Ironically, the Mgalekgolo is among the least common Lekgolo configurations, but due to their formidable combat capabilities they are most commonly fielded by the Covenant.[4] While the term "Mgalekgolo" is formally limited to this particular type of Lekgolo gestalt with the other forms having different names,[2][4] it is sometimes applied to other Lekgolo colonies as well, such as that used to operate the Deutoros-pattern Scarab, or the Goliaths employed by the Banished.[6]

"The Hunters have come to our aid, Arbiter. They will fight by our side."
— A Special Operations Sangheili during the Battle of Installation 05.[7]

After the formation of the Covenant, early experiments with the Luminaries reverse-engineered from the Forerunner Dreadnought in High Charity led the Covenant to the Lekgolo homeworld Te, which was located near Urs, the home system of the Sangheili. While the San'Shyuum and Sangheili hoped to find a treasure trove of Forerunner artifacts, they instead found hives of Lekgolo inside orbital rings surrounding the planet. The rings were in fact the destroyed remains of an ancient Forerunner installation in orbit. The relics had been the Lekgolo's food for millennia, and the orbital rings were actually composed of digested-and-destroyed Forerunner relics that some of the Lekgolo had been consuming.[8]

An Arbiter facing off against naked Mgalekgolo in their natural unarmored form.

Enraged by the Lekgolo's "desecration" of Forerunner relics, the Covenant began a military campaign against the Lekgolo. After facing considerable difficulty eradicating the creatures,[4][8] Arbiter Jeht 'Lcmutee was sent to study the Lekgolo for a full year on Rantu, one of Te's moons. It was there that the Arbiter witnessed the Lekgolo combine into Mgalekgolo to battle him, forming around a series of rocks to support their bipedal forms.[9] Recognizing the potential of the gestalts, 'Lcmutee returned to High Charity and suggested that the Lekgolo be inducted into the Covenant. However, the Lekgolo initially resisted, leading to a conflict between them and the Covenant. While the Mgalekgolo won most of the time on the ground, they faced extinction and were forced into the Covenant by the superior starship technology of the Sangheili.[10] This event later came to be known amongst the Covenant as the "Taming of the Lekgolo". The Covenant may have used Sharquoi armor designs for the Mgalekgolo armor.[11]

The Mgalekgolo gestalts, armed with thick armor plates and assault cannons, would come to serve the Covenant as shock troops. Numerous Mgalekgolo participated in the Human-Covenant War. During the Great Schism, most Mgalekgolo pairs sided with the Sangheili, though others remained with the Prophet of Truth and the main body of the Covenant.[7] There is no known reason for the split in loyalty.[4]

During the further conflicts in the wake of the Human-Covenant War many Mgalekgolo would fight on behalf of Jul 'Mdama's new Covenant order against humanity and Swords of Sanghelios. These Mgalekgolo participated in the battles of Requiem, Nuusra, Sunaion, and Genesis.[12][13] Others would remain loyal to Arbiter Thel 'Vadam and his Swords of Sanghelios.[14] Several would join Vata 'Gajat's mercenary group and partake in the Battle of Ealen IV.[15] Mgalekgolo that were a part of the Banished were unusually aggressive and may have been forced into service.[16] These Mgalekgolo would be deployed by the Banished against the crew of the UNSC Spirit of Fire during the Second Ark Conflict.[17] During Operation: SPEARBREAKER, a Banished Mgalekgolo known as Colony led an effort to destroy the Spirit of Fire with a Forerunner Despair-class fighter.[18]

During the Battle for Zeta Halo in May 2560, the Master Chief faced a number of Mgalekgolo in service of the Banished. His new AI companion, the Weapon, was confused when he identified the creatures as Hunters, having no idea what a Banished or a Hunter even was and then deciding that she didn't want to know the answer to what they hunted. One of the targets of opportunity that the Master Chief went after on the Halo ring was a Mgalekgolo pair known as Myriad who, much like Colony, trended towards a more individualized identity rather than being a part of a subservient hivemind. Another Mgalekgolo pair were sent after the Master Chief by War Chief Escharum in the arena on the second level of the House of Reckoning while the Master Chief was fighting his way through the Banished stronghold in order to rescue Fernando Esparza.[19]

Mgalekgolo almost never associate or communicate with other species other than the Sangheili. They are dismissive, scornful, and arrogant to the "lesser" species, and are contemptuous to their foes.[10] 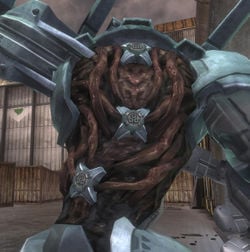 A Mgalekgolo is not a single organism, but rather a collective of small, orange, eel-like creatures called Lekgolo. In order to form a Mgalekgolo, dozens of individual Lekgolo bond with one another both physically and neurologically to form a single "hive-minded" community.[20] The Mgalekgolo is the most common form seen in combat during the Human-Covenant War, but is actually one of the rarer and smaller forms in the Lekgolo society, used primarily in interaction with the Covenant hierarchy.[4] Their primary combat tactic is an approximation of a hunter-killer formation, hence the name "Hunter".[2] Because of their combined neural nets' sensitivity to their surroundings, Mgalekgolo can think and work as an effective combat unit without even using verbal communication. They can also locate their enemies even without directly "seeing" them, such as when they are facing the opposite direction.

Mgalekgolo do not use vocal chords to speak, but instead vibrate their bodies to make a low rumble to produce speech. They are capable of mimicking the language of other species, forming words and sentences that are "felt" rather than heard. Their quiet nature among other races of the Covenant is probably a result of difficulty speaking with other Covenant races. The known names of some Mgalekgolo seem to imply that they use very simple vowels and only a few consonants.

Mgalekgolo usually stand between twelve to thirteen feet tall, but during combat they hunch themselves over to protect their vulnerable neck and midsection, reducing their height to roughly eight feet. They fight using assault cannons integrated directly into their armor, and they carry an enormous two-ton pavise shield made of an alloy derived from the same material that forms Covenant warship hulls.[2] Mgalekgolo body armor is eight centimeters thick, with the shield being even thicker.[21] Their shields and armor protect them from almost every form of plasma-based or ballistic weaponry available to Covenant and human infantry alike, and the shield is a powerful melee tool capable of crushing anything in its path and allowing the Mgalekgolo to neutralize most enemies in close combat. However their heavy protection is inadequate against dedicated anti-tank weapons, with 102mm HEAT warheads,[22] 105mm recoiless rifles,[23] and 90mm high-velocity tank cannons taking them out with ease.[24] The M149 Magellan 105mm recoiless rifle is even capable of over-penetrating both the pavise and the armor with a delayed fuse round.[25] There are a few weak spots in the armor however, such as the lower back where they are vulnerable to regular weaponry. However, due to their sheer size and speed, it is difficult for enemies to hit these spots. Their arm-mounted shield was the basis for an avenue of UNSC research which produced an early prototype shield of human origin.[26]

The assault cannon the Mgalekgolo wields operates in two modes; one firing a single explosive capsule of incendiary fluid,[12][27][28] the other spraying the fluid out like a beam.[29][30][31]

When a single Mgalekgolo becomes too big, the colony will divide in half to create two independent Lekgolo colonies. These colonies will share an extremely close and mysterious bond, referred to only as being "bond brothers", or "mates".[32] Mgalekgolo that have split into "bond brothers" are recognized by spiked appendages that rise from their shoulders, which means that they are bonded to another Mgalekgolo.[8] Bonded Mgalekgolo colonies are dropped into battle together by the Covenant, as the Spartans learned: where you find a Mgalekgolo, there is always another close by. If one of the bonded colonies is killed, the other will go into a frenzied state, much like the berserk state of a Jiralhanae, or the suicidal charge of a desperate Unggoy. If left alone for a long period of time, however, they will adopt a "tactical split personality" of shooting followed by melee attacks. On one occasion a Mgalekgolo whose bond brother was killed went berserk killing its allies aboard the crashed Radiant Perception and eventually became suicidal.[33]

Mgalekgolo have three names: a personal name, a bond name, and a line name. When written with the Roman or Latin alphabet, the three names can be transposed together as one single name or separated by spaces.

Unlike most Covenant forces, Mgalekgolo seem to possess presumably no visible rank. As they are deployed more like equipment or weapons platforms rather than conventional troops, rank may simply not apply for them.[citation needed]

However, they can be deployed independently of other Covenant troops, which may indicate that a level of independence and responsibility may be granted, thus meaning that they may have a high enough rank to be trusted by themselves. During the Battle of Sigma Octanus IV, Mgalekgolo are seen guarding the crystal in Côte d'Azur, which is retrieved by Blue Team. One of these Mgalekgolo killed a Kig-Yar by stepping on it,[35] demonstrating the Lekgolo colonies' characteristic disregard for the lives of other species, whom they generally view as annoyances rather than allies.[2] During the Onyx Conflict, some Mgalekgolo apparently had command of lower-ranking Sangheili, even killing one of them for failing to follow orders, signifying they may have a higher military rank in the Covenant military than previously indicated.[36]