This article is about the Banished facility. For the Halo Infinite campaign level, see House of Reckoning. 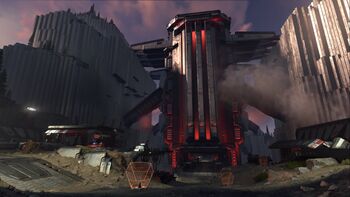 The House of Reckoning and the checkpoint at its entrance.

"The House of Reckoning. Such an appropriate name. Many of your kind have entered this arena. None have left!"
— Escharum speaking to John-117[1]

The House of Reckoning was a Banished facility on Installation 07. During the Battle for Zeta Halo, it served as War Chief Escharum's headquarters.

The House of Reckoning was a towering structure with at least four levels accessible via elevator. The first two levels were large hangar bay-like rooms that contained "training" arenas - mock battlefields made from stolen and salvaged UNSC sandbags, weapons, vehicles, and even structures - placed on beds of sand, dirt, small rocks, and large boulders (likely acquired from the surface of Zeta Halo itself) atop of large, raised platforms. The third level consisted of a single UNSC structure, the interior of which was set up to mimic an urban, close-quarters combat zone. Each of these arenas could be monitored from an observation room on their respective levels.[1]

The fourth level possessed a torture machine like the ones used at Chak 'Lok's Tower.[1]

The House of Reckoning also had a command room, where Escharum monitored and directed his troops via a holotable. He also communicated with the Harbinger from this room.[2] 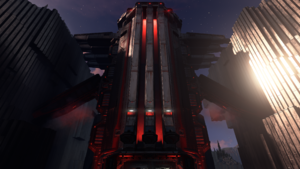 The House of Reckoning served as Escharum's headquarters during the first six months of the Battle for Zeta Halo. Escharum monitored the war from here and issued orders, proclamations, and occasional admonitions to the Banished commanders via "inbound decrees." The commanders then forwarded Escharum's decrees to their troops.[3] Escharum also held in-person meetings with Tremonius, Jega 'Rdomnai, and other high-ranking Banished leaders at the House.[4]

In addition to serving as Escharum's headquarters, the House of Reckoning also served as the final destination for UNSC POWs after they'd been interrogated at Chak 'Lok's Tower. Within the House of Reckoning, some prisoners were forced to undergo "training", in which they'd be placed on artificial battlefields and forced to fight against overwhelming numbers of Banished troops. Despite being allowed to arm themselves with scavenged UNSC weaponry, no prisoner survived the arenas. Other prisoners were simply tortured to death by Jega 'Rdomnai for his amusement.[1]

In late January 2560, Spartans Hudson Griffin, Panago, Henri Malik, and Sarkar attempted to infiltrate the House of Reckoning and assassinate Escharum. However, Escharum had anticipated their actions and his guards ambushed the Spartan team when they arrived. The mission failed, with only Spartan Griffin surviving.[5]

On May 28, 2560, Jega 'Rdomnai kidnapped Fernando Esparza, the pilot of Echo 216, and brought him to the House of Reckoning. Knowing that John-117 would try to rescue the pilot, Escharum kept Esparaza alive inside a torture machine on the House's fourth level. Escharum then relayed the coordinates of the House of Reckoning to the Master Chief.[6]

After fighting his way through the heavy defenses surrounding the House,[7] the Master Chief stormed the stronghold and fought his way through the first two arenas. He fought and defeated Jega 'Rdomnai inside the third arena, before finally arriving at the fourth level where Escharum was waiting for him. The two warriors clashed and after a lengthy battle, the Master Chief triumphed and freed Esparza. Escharum lived long enough to assure the Master Chief that his death would only inspire others to take up his cause.[1]