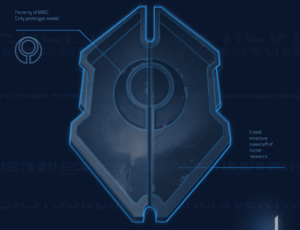 The shield as depicted in Halo 2 for Windows Vista.

The shield is a piece of UNSC equipment. At some point, an early prototype model was created based off research into the arm-mounted shields wielded by the Mgalekgolo.[1]

The shield is available for use as a backpack accessory in Halo 3, added into the game in Series 6 of Halo: The Master Chief Collection. The shield is a part of the "Sword and Board" permutation, featuring the shield with a machete and a Sangheili skull - intended to emulate the Legendary difficulty sigil. During the Season 6 flight, the Sword and Board permutation featured two crossed machetes, though later in the flight and final release the model was updated to only show one, with the shield now inheriting the player's primary color. This marks the first time the shield has been seen in a Halo game outside the difficulty shield insignia.

The shield is featured as the background shield found on the difficulty emblems for Easy, Normal, Heroic and Legendary difficulties in all currently-released Halo games. It is given some in-universe flavour text in the menus for Halo 2's PC port alongside the Machete. In the Bungie-era Halo games, the shield was emblazoned with the Marathon symbol, though following the transition to Halo 4 and 343 Industries, the shield now features the Reclaimer symbol.