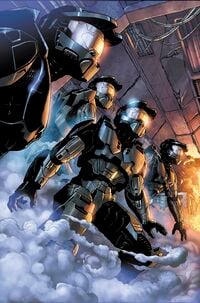 MJOLNIR: Black is a "skunkworks" prototype of the MJOLNIR Powered Assault Armor, likely part of MJOLNIR's Advanced Hardware Program.[1] It was designed by a top-secret parallel development lab in Songnam, Korea.[2] Spartan Black Team was equipped with MJOLNIR: Black from at least the summer of 2552 until their deaths in July 2557.[3]

MJOLNIR: Black is superficially identical to the Mark VI variant. However, it features several unique internal design elements. The heads-up display has a field of view of nearly five kilometers, allowing extreme-range reconnaissance.[2] Black Team's armor (the only known examples of the model) was colored black rather than the standard olive green, increasing the user's ability to hide in shadows. One arm hosts a device nicknamed the "Interrogator", featuring a built-in microphone, processor, and speaker for translation of Covenant languages to English and from English to Covenant speech.[2] The armor is capable of carrying a smart AI. Black is the third known Mjolnir variant to feature recharging energy shielding as standard, following the Mark V[B] and Mark V armors.

Mjolnir: Black's faceplate is said to be reflective gray in "Blunt Instruments",[2] but in Halo: Blood Line is shown as gold, even during a flashback to the events of the short story. The faceplate is also shown as gold in Halo: Escalation.