This article is about the Mjolnir variant. For the Sangheili harness, see Commando harness.

The K variant's helmet is designed to improve a Spartan's tactical awareness without the use of the modular packages that can be added to all MJOLNIR platforms.[3] The Commando helmet package includes the most comprehensive, up-to-date tactical hardware and software systems,[1] being compatible with CMA and UNSC battle network protocols.[3] The variant's shoulder pauldrons offer excellent protection at the cost of limited joint mobility. The field support attachment provides additional functionality to the MJOLNIR armor.[1]

The K variant was developed at the Special Warfare Center in Seongnam, United Korea, to aid Spartan supersoldiers in specialized assaults on conventional military targets. When production for the K variant was approved, Chalybs Defense Solutions was awarded the contract to manufacture the armor, with final testing conducted at the Chalybs Testing Preserve.[1]

The Mark IV version, which was simply a modification to the MJOLNIR suit rather than a distinct variant,[1][Note 1] originated as a prototype for standardized team leader kits.[4] The Mark V[B] version was introduced near the end of the war in November 2551 due to the success of the Mark IV ad hoc. Unlike the previous iteration, the Mark V version was designed as a fully featured variant of the Mark V system.[1] It was first deployed during the siege of the Inner Colonies relatively late in the Human-Covenant War.[1]

As late as 2560, GEN1 Commando could still be requisitioned by Spartans, upgraded to be roughly equivalent to GEN3.[5]

Several Spartans and team leaders made use of this system. Frederic-104 wore a Mark IV/K helmet during Battle of Sigma Octanus IV.[6] Carter-A259 led Noble Team through several operations wearing the armor during the Human-Covenant War.[7] 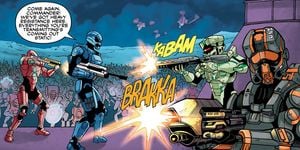 Naphtali Contractor Corporation's version includes a helmet, torso armor, and shoulder pauldrons. The GEN2 variant is loosely based on its GEN1 predecessor.[9]

The helmet[2] has a built in CNM suite for tactical application; this enables real-time synchronization with the UNSC battlenet.[10] The helmet also has field elaboration software for real-time combat intelligence modification. The body has a wide-range fireteam allocation module.[2]

Though the GEN2 COMMANDO-class suite only vaguely resembles its Mark V predecessor, the GEN2 NOBLE-class Mjolnir is a recreation of the Mark V/K's external architecture.[11]

After Meridian fell, all contracts that Chalybs had were absorbed into companies that survived the war. NCC was the company that got a hold of Commando and started to circumvent its GEN1 limitations, making the armor more open for more users, and beginning production of the GEN2 of the Commando armor.[2] This acquisition of Chalybs' original COMMANDO designs also allowed NCC to bring their GEN2 Mjolnir armor to market several months ahead of schedule.[10]

Testing for the armor began at the Buffalo Breaker Yards.[2]

While the armor was made more open for more users, many team leaders still opt to use Commando systems possibly out of tradition.[2] A Spartan-IV from Fireteam Bailey wore a green-colored GEN2 Commando armor during the Battle of Ealen IV.[12]

The Commando helmet can be viewed in the Armory at the rank of Lieutenant Colonel and can be unlocked once at the rank of Commander. All Commando armor types are unlockable in the game's purchase system via the use of cR. In Halo: The Master Chief Collection, the Commando set is attainable in the Season 1: Noble progression system.

The helmet resembles the HAZOP helmet with a small area of black polymer at the bottom of the visor. The base Commando helmet has a HUL[3] already attached, making it one of only three base helmets to have an attachment, the others being the Beta-5 Operator helmet, which has a goggle-like attachment, and the EOD helmet, which has a CBRN module. Two upgrades are available for the helmet. The first, CBRN/CNM, replaces the HUL[3] attachment with a CBRN apparatus featuring an Command Network Module on the left side. The second, UA/FC-I[2], adds an up-armor plate with a third-generation Hardened Uplink Module on the right side and a Command Network Module on the left side.

The shoulder pauldron is characterized by a large curved plate of armor set on the standard base, which connects it to the Spartan's shoulder. It is noticeably large and is placed high on the Spartan's arm. It is one of few shoulder pieces that utilizes the player's selected secondary color instead of their primary color.

Commando was one of the armor permutations to return, albeit completely redesigned for GEN2, in Halo 4. In The Master Chief Collection, the Commando set and its Fracture (FRCT) skin variant are available by default.

The Halo 4 design of Commando returns in Halo 5: Guardians. The helmet and body armor are unlockable through the Requisition system. The body armor includes the Commando chest and shoulders, the Ricochet forearms and Recruit legs. The helmet of NOBLE-class Mjolnir was based on the GEN1 design seen in Halo: Reach. The GEN2 Commando set has three skins: Verde, Arius, and Matrix.

The Mark V Commando helmet and its attachments are available for multiplayer Spartan armor customization on the Mark V [B] armor core in Halo Infinite. The Commando shoulders are available under the SAP series of shoulder pads.