UA, short for up-armor, is a category of supplemental armor attachments and accessories compatible with the MJOLNIR Powered Assault Armor. Like some other MJOLNIR variants, many of the UA pieces are not exclusive to the MJOLNIR system, but are in use by regular UNSC Army or Marine troops as well. Many UA attachments are available as Armor Permutations in Halo: Reach.[1]

Most of the helmet variants available in Halo: Reach have an up-armored upgrade, sometimes coupled with other external helmet additions such as the UA/HUL attachment to the Mark V [B] helmet. UA helmet attachments consist of reinforced metal plates or bracers attached to the helmet's forehead to give better protection to the wearer in combat.

A trade-off between increased protection and additional mass.

This armor also known as the "UA/CA plate" upgrade adds a solid plate over the soft undersuit. This plate attaches to and moves with the chestplate, and is not attached to the undersuit. It is not affected by color choices.

Many technologies initially developed for MJOLNIR have seen widespread adoption.

This chestpiece adds the standard ODST chest armor over the default Mark V chest piece. It is affected by primary color only.

Bringing grenades to a gunfight.

This chestpiece adds an angular steel plate over the default armor. It has four bolts that screw into the default chest armor and hold the armor on. It somewhat resembles the EOD chestpiece from Halo 3. It is affected by primary color only. 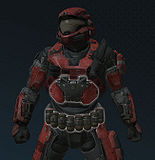 Let's blow some stuff up.

Supplemental armor for the default Mark V chest combined with a grenade belt around the waist, designed to provide Spartans with the most impact across a variety of scenarios. The chestpiece's lightweight design allows for maximum freedom of movement.[2]

This wrist armor consists of a small octagonal piece of additional armor attached just above the wrist, on the forearm guard. It is affected by primary color only.

This forearm protector consists of a thick piece of supplemental armor held onto the gauntlet with two pairs of large clamps that strap completely around the arm. It is affected by primary color only.

UA/NxRA is a piece of external non-explosive reactive armor that is attached to the MJOLNIR thigh piece. It is universally compatible across UNSC armor systems, and is commonly employed by UNSC Army and Marine forces as well.

UA/Chobham adds a piece of supplementary Chobham ceramic composite armor over the side of the default MJOLNIR thigh.