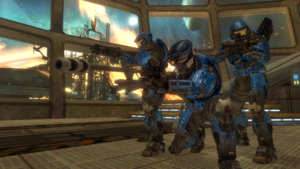 The most famous screenshot of the cut armour.

This article is part of a series on
Halo: Reach cut content

During the production of the downloadable content for Halo: Reach, a number of armor permutations were developed but ultimately cut. The sets were originally teased in a trailer for the game's Defiant Map Pack, and intended to be included in the Anniversary Map Pack - though were ultimately scrapped.

The Hardened External Sensor Array - External (HESA-E) was a helmet attachment available in the Halo: Reach Multiplayer Beta. The attachment is useable on the Military Police helmet, and costs 20,000 cR to buy. In the final game, this attachment is still available though under the name of the HU/RS attachment.

These cut armour sets first appeared in promotional material for Halo: Reach's Defiant Map Pack in 2011, where some of them were worn by a player in three screenshots of the map Condemned. The player wore the AKIS helmet, with the CBRN and GRD attachments, in combination with the EXO/TSCS chest piece.[1][2] In the absence of an official name, the Halo community took to calling the then-unknown helmet "GRD",[3] a nickname that stuck and eventually became the official name for one of the helmet's attachments.[4]

A lack of official communication about or acknowledgement of the mystery helmet from Bungie or 343 Industries led to a great deal of speculation about how it might be released, with some even suggesting that it could already be unlocked through some esoteric method.[3] Eventually, these rumours were proven false when, on February 11th, 2012, 343 Industries employee David Ellis confirmed that 343 had intended to release it alongside the Anniversary Map Pack, but that it had been cut due to time and resource constraints.[5] Ultimately, neither the AKIS helmet nor the EXO/TSCS chest piece were ever released for Reach on the Xbox 360.

The Spartan dolls Easter egg in the Anniversary Map Pack features dolls of Spartans wearing the same armor configuration as the player in the Defiant Map Pack screenshots, including the AKIS helmet. This was a deliberate acknowledgment of the armor on 343 Industries' part.[5] This doll object was later made available as a placeable object in Halo 5: Guardians' Forge mode, in which it is known as the "5th Spartan" doll.[6]

In 2019, it was announced that Halo: Reach would be added to Halo: The Master Chief Collection, and that The Master Chief Collection would be ported to PC, with Reach being the first of the games in the collection to release on the platform.[7] This brought with it renewed interest in the unreleased armour, with many requesting that it be included in the game's re-release.[8][9][10] 343 Industries would officially address these requests in a development update in July of that year, saying that they "[were] currently investigating it but [could not] commit to it being in the game at [that] time" and also noting that they were interested in expanding the pool of customization items in each game, potentially even including new armors.[11]

Later the same year, a modder by the name of Gamecheat13 discovered customisation renders for two cut armour sets in the game files of the second Halo Insider flight (dubbed the "FireFlight") of Halo: The Master Chief Collection's PC port of Halo: Reach,[12] and also unearthed the internal codenames for both sets: spartan_dlc_condemned and spartan_dlc_preserve.[13] The spartan_dlc_preserve set featured the AKIS helmet paired with an unidentified chest piece, while the spartan_dlc_condemned set included the EXO/TSCS chest piece with the Mariner helmet.

Eventually, in September 2020, it was confirmed in an MCC Development Update that several of these armour sets would be making their way into Halo: The Master Chief Collection as part of Series 4: Reclaimer. This update also revealed the final name for the so-called "GRD" helmet: AKIS.[4] However, due to issues in development, these armors did not meet a high enough quality standard to be included in the game as of Season 4's launch,[14] and so AKIS, EXO/TSCS and Mariner were pushed back to Series 5: Anvil.[15] To-date, the Preserve chest has yet to be implemented in the collection.

The most famous piece of content developed for this initiative, the helmet named in The Master Chief Collection as AKIS and dubbed by fans as "GRD" was featured heavily in a handful of promotional materials for the Defiant Map Pack. The helmet went on to be featured in Season 5 with three helmet attachments; one of which was named GRD in reference to the fan name. This helmet is the subject of the Spartan dolls Easter egg.

Another helmet developed for this collection of DLC armor, the Mariner helmet was never showcased in any promotional materials - the first time it was ever revealed was with its inclusion in The Master Chief Collection.

The chest named in The Master Chief Collection as EXO/TSCS was also featured in the originally-released Defiant screenshots, though was partially-obscured by weapons and character positioning. It was later released as part of Season 5.

The chest piece known in the game files as "preserve" has yet to be officially acknowledged or implemented in The Master Chief Collection, making it the only known cut Reach armor to have not been resurrected.[13] The "Preserve" chest piece features two large armour plates which curve downward from the user's shoulders, towards the centre of their chest. At the join between these two plates, there is a wedge-shaped protrusion pointing downwards, directly beneath the user's head. Additionally, below the left and right plates, there is an additional piece of armor on either side, just above where the wearer's ribcage would end. These meet beneath the wedge-shaped protrusion, at the user's solar plexus, where there is a piece of unidentified apparatus jutting out of the front of the armor.