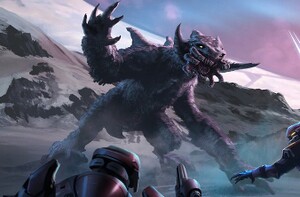 The chaefka, known to ancient humans as a neldoruut[1] and colloquially known as the tusk beast,[2] is one of several species encountered by a joint UNSC–Swords of Sanghelios task force encountered during an expedition to Installation 00 in 2555. They were similar in stature to the polar bears of Earth, but with taloned paws, tusks protruding from their faces, horn-like protrusions at the shoulders, and toothed mouths sealed by a set of six mandibles.[3] Chaefka were capable of producing pheromones which had a psychotropic effect on humans.

Chaefka were known to eat vegetation, though their sharp teeth and claws would suggest that they are omnivorous.[4] The chaefka encountered on Installation 00 initially attacked the UNSC-Sangheili task force on sight, however evidence suggests that they were acting at the behest of monitor 000 Tragic Solitude, as after the monitor's destruction they reacted to the interlopers with indifference.