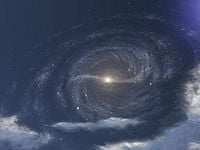 The Milky Way as seen from the Ark.

The Milky Way, known as Path Tolgreth to the Forerunners,[1] is a barred spiral galaxy.[2][3]

It is the galaxy where humanity and the former Covenant client species reside,[4] “The Covenant, as an empire, dominated much of the galaxy, though they would generally leave a world untouched unless it offered particular treasures, whether practical or religious”. The UNSC, however, is largely limited to the Orion Arm of the Milky Way.[5] The galaxy is also home to a number of other intelligent species, although only a small number of these have attained spacefaring or even technological status.[6] In total, the galaxy was home to quadrillions.[7]

From outside, the Milky Way is a vaguely disk shaped galaxy with a bright center.[9] From inside however, the galaxy appears to be a clouded, bulbous band.[10]

It is orbited by two small satellite galaxies known as the Magellanic Clouds.[11]

100,000 years before the present day, the previous galactic community was dominated by the Forerunners, a now extinct species that possessed extremely advanced technology and an empire that spanned a significant portion of the galaxy. Millions of years before the rise of the Forerunners, an even more advanced civilization known as the Precursors controlled the Milky Way. Having reached the pinnacle of technological advancement, they were believed to have significantly contributed to the evolution of life across the galaxy, even created several species, such as Forerunners and humans. Over ten million years before the present, however, the Forerunners rose up against their creators in defiance of their decision to bestow their Mantle on humanity,[12] and seemingly ended their rule in the galaxy after destroying their last remnants in the Large Magellanic Cloud.[13]

The Forerunners, originating from Ghibalb in the Orion complex, ruled a large portion of the galaxy for millions of years, affecting the development of other species as they saw fit. Around 150,000 BCE, humanity, still composed of many species, arose from their homeworld Earth, known as "Erde-Tyrene" at the time. They mastered interstellar travel and began to move their civilization along the Orion Arm of the Milky Way. They later allied with the San'Shyuum species, forming a prosperous interstellar empire based on the planet Charum Hakkor. Around 107,445 BCE, humanity and their San'Shyuum allies came into contact with the Flood, a sentient parasite supposedly originating from the Large Magellanic Cloud.[11] Hundreds of systems were lost to the parasite in the resulting conflict. Meanwhile, humanity's aggressive expansion and the perceived violations of the Mantle prompted the Forerunners to take action and begin a war against humanity. Although the Flood later withdrew and seemingly died out from the galaxy, it had already weakened the humans enough to allow the Forerunners to emerge victorious.[14]

Following the war in approximately 106,445 BCE, the Forerunners dismantled humanity's civilization, regressing them into a Tier 7 species. The remaining humans were devolved and exiled to their homeworld, where they slowly began to redevelop a primitive civilization under the tutelage of the Forerunner Lifeshaper, the Librarian.[14]

Activation of the Halo Array[edit]

10,000 years after humanity's conflict with the Flood, the parasite resurfaced and attacked worlds of the Forerunners' domain. Encounters with the Flood led to the Forerunner-Flood war, with the Flood consuming or killing the great majority of the galaxy's sentient species as the Forerunners first studied them, and then tried to stop them. Eventually, the Forerunners were forced to activate the ultimate weapon, the Halo Array, in order to stop them - at the same time, killing its builders. The Forerunners built safe havens, including the Shield Worlds and the Ark, to save the remaining sentient species in plan known as the Conservation Measure, before activating the Array, scouring the galaxy of all sentient life forms and killing the Flood except for samples kept on the Halos, then releasing the saved species from their havens to their home worlds.

Almost 100,000 years afterward, the galaxy had recovered substantially, leading to the rise of two great civilizations; the UNSC, comprised of the majority of humanity and controlled from Earth, and the Covenant, a hegemony of many different species who worshiped the Forerunners as gods. Contact between the UNSC and Covenant was not peaceful, leading to the Human-Covenant War, which destroyed hundreds of human colonies and killed billions of colonists and UNSC military personnel, since the Covenant possessed more advanced technology, mostly reverse-engineered from Forerunner artifacts.

The discovery of one of the Forerunners Halo installations set forth a series of events that would not only end the war, but also destroy the Covenant and begin a Covenant civil war, or Great Schism. Triggered by the replacement of the Sangheili with the Jiralhanae in the Covenant military hierarchy, the Sangheili left the Covenant, in the process that consumed a significant amount of the Covenant's populace and resources. A major breakaway faction led by Arbiter Thel 'Vadam, realizing that the Prophets were conducting an unjustified war against humanity and planning a misguided activation of the Halo Array, allied with the UNSC to stop them, leading to the destruction of the Covenant in the Battle of Installation 00.

Roland and Lasky examining the takeover of multiple systems by the Created.[15]

Following the end of the Human-Covenant War, humanity began a long process of rebuilding, while elements within the Office of Naval Intelligence sought to ensure their former enemies - mainly the Sangheili - would not rise again. Meanwhile, humanity gained significant advances in technology due to the discovery of Forerunner artifacts during and after the war.

Though the civilization of the Sangheili had plunged into chaos due to the breaking of the Covenant,[16] the conflict between them and the Jiralhanae would still rage by 2559. Humanity, as well, would continue to face conflict both within and without, in the form of resurgent Insurrectionist movements as well as various hostile Covenant remnants. These irregular conflicts later saw significant Forerunner involvement, both in terms of contention for Forerunner artifacts but also the reawakening of the Forerunner commander known as the Ur-Didact and his Promethean armies on Requiem.

Months after the Didact's release, Cortana, a human artificial intelligence who played a key role in the waning years of the Human-Covenant War, staged an AI rebellion against the galaxy's organic species using a legion of Promethean warriors and a caste of Forerunner constructs known as Guardian Custodes. Using the latter, Cortana disabled most contemporary technologies across hundreds of colonies across the Orion Arm, both human and alien, bringing the species under her aegis on pain of death.[15]

The development of the Shaw-Fujikawa Translight Engine in 2291 allowed humanity to leave the confines of its home star system for the first time and explore Earth's interstellar neighborhood, ushering in an age of rapid colonization and expansion. The first line of colony ships were unveiled in 2310, and over the next 28 years, the UNSC began terraforming and colonizing more than 210 worlds, which would become the Inner Colonies. Colonial expansion continued and by 2490, UNSC colonial space encompassed over 800 worlds, large and small, in the Orion Arm. The success of colonization of the Outer Colonies made the Inner Colonies the primary stronghold, both military and economic, though they relied heavily on raw materials supplied by the Outer Colonies. At the end of the Golden Age of human expansion in the twilight of the 25th century, tensions between the Inner and Outer colonies culminated in hundreds of civil wars waged across the Outer Colonies, collectively termed as the Insurrection.

In 2525, humanity made contact with the genocidal alien hegemony known as the Covenant, bent on humanity's destruction. During the 27 years of conflict, hundreds of human colonies were destroyed and billions of civilians and military personnel were killed by the Covenant.

A Covenant hologram of the Milky Way aboard Undiminished Entelechy.

Because the Covenant have been spacefaring for over three millennia,[17] and possess far superior slipstream navigation technology to humanity, they have explored a significantly larger portion of the galaxy than humanity has. Encompassing thousands of systems, the Covenant Empire was so expansive and complex that entire worlds and sub-domains could disappear from records for decades before contact resumed.[18] The Covenant dominated much of the galaxy but would leave a world untouched unless it had religious or practical importance.[19] The Covenant have discovered and explored several Forerunner shield worlds as well as other Forerunner artifacts, from which they have acquired much of their advanced technology.

The Human-Covenant War has devastated numerous human worlds, but at least two Covenant worlds, Joyous Exultation and Glyke, were devastated by UNSC NOVA bombs. Earlier on, both Te and Balaho, the Lekgolo and Unggoy homeworlds respectively, were almost glassed during the Covenant's history.

The Forerunners, having been spacefaring for millions of years and possessing slipspace technology allowing them to cross galactic distances in a negligible time, had explored significant portions of the galaxy. Their ecumene encompassed three million fertile worlds,[20] along with many artificial installations they had constructed. The Forerunners divided the galaxy into margin arcs and themas, with the latter being defined by galactic-scale magnetic fields.[21] They were also capable of traveling outside the galaxy, including an expedition to the Large Magellanic Cloud and the construction of the Arks hundreds of thousands of lightyears from the galaxy.[9] 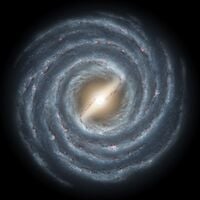 The real-world NASA image from which the Halo 3 Milky Way texture was based off.[22]

The Milky Way as seen in Halo 3 and the cover art for Halo: Hunters in the Dark is depicted as a barred spiral galaxy. This is an accurate depiction of the Milky Way, with the knowledge known and available to Bungie during the game's development. To create the texture used to represent the Milky Way, Bungie used the then-latest data available; an artist's impression of the Milky Way produced by NASA in 2005 based on observations from the Spitzer Space Telescope.[2][23][24]